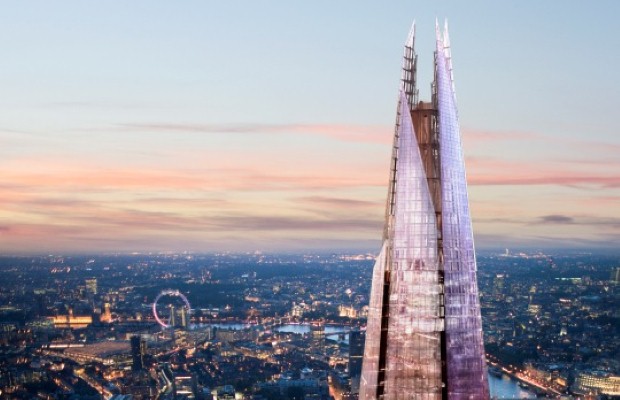 The Shard is the tallest building in Western Europe (photo: The View from The Shard)

Gazing out over London from the top of The Shard – London’s newest (and tallest) landmark – is like looking out over a child’s toy town, with the mighty HMS Belfast looking as if it’s the size of a plastic toy boat and the skyscraper city of Canary Wharf – a cluster of lego blocks. From one side I could see the iconic Tower Bridge and the River Thames snaking into the distance all the way to the O2 Arena and beyond; on the other The Gherkin, the domes of St Pauls and Wembley Arena in the distance.

Almost twice as high as any other viewing point in London, The View from the Shard – the new visitor attraction at the pinnacle of The Shard – promises sweeping 40-mile, 360-degree views across London; the only place you can see all of London all at once. Not only is it the tallest building in London at 309.6 metres tall, but the tallest in the whole of Western Europe. 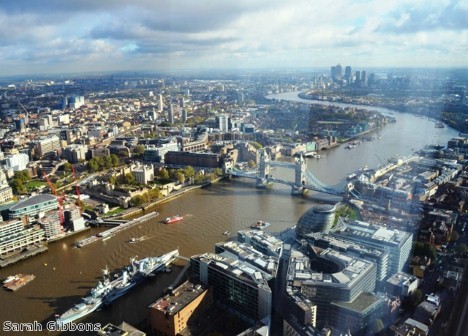 Having witnessed the soaring glass structure being built, level by level, over the years, I jumped at the chance to have a sneak preview of what visitors can expect from the attraction when it opens in February 2013.

Arriving yesterday morning, a perfectly clear day in London, I couldn’t wait to get up there, having wondered what the view from the top would be like for so long. A work-in-progress tour, most of the interior of The Shard is still being built and the sounds of builders at work greeted me as I entered.

When finished, the entrance to The View from the Shard will actually be located in London Bridge Underground Station and visitors will first be greeted with a series of display panels showing digital maps of London, a series of tongue-in-cheek pictures of famous Londoners (such as Margaret Thatcher and Karl Marx pictured riding a tandem bicycle) and film footage of city life – preparing visitors for the breathtaking views that await them. Much of the experience is still being built and much of what will be included is still under wraps.

The first stop on my tour was floor 33, where we were to change lifts. I could feel my ears adjusting to the air pressure as we soared up 33 floors in less than 30 seconds. Then, up to level 69 – our final destination. The view encircled me as soon as I stepped out of the lift and into the glass observation deck. I could see all of London’s attractions: the London Eye, Tower Bridge, St Pauls, The Tower of London and a smattering of green spaces in between blocks of skyscrapers, tower blocks and the elegant historic buildings that London is so famous for. Although not completed, visitors can go even higher, to level 72 – the highest public level of The Shard where they’ll be exposed to the elements. 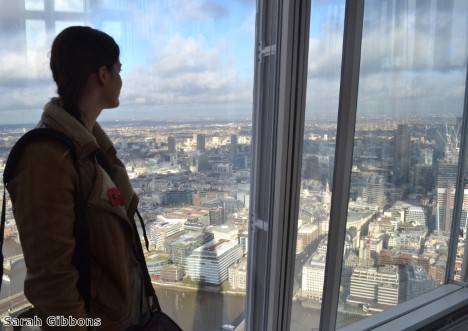 When the viewing galleries are finished, visitors will be able to view the panoramic vistas through 12 digital ‘Tell:scopes’ (digital telescopes with large touchscreens) which are being made available in Europe for the first time. These will show alternative day and night-time views so you’ll be able to see the views in front of you at different times of the day. Fully interactive, they’ll identify the famous landmarks as you move the monitor in whatever direction you choose, and provide information about them in 10 different languages. In total, 200 landmarks and places of interest will be highlighted.

The Shard may divide opinion amongst Londoners – some claiming it an eyesore, some a masterpiece. One thing’s for sure, the view of London cannot be surpassed and I for one cannot wait to return and enjoy the full experience next year.

The View from the Shard will open on February 1st 2013. Tickets are now on sale. Visitors can book tickets on www.theviewfromtheshard.com, via the temporary box office opposite The Shard at London Bridge or via the box office hotline: +44 (0)844 499 7111. Tickets and gift certificates cost £24.95 for adults and £18.95 for children.

The View from the Shard has finally opened its doors today – February 1st 2013. The tallest building in Western Europe, The Shard is London’s newest landmark and will offer visitors a whole new perspective on the capital.

This year sees the bicentenary for one of the UK’s most prolific authors, Charles Dickens. Many of the stories he wrote were based in London – so two hundred years on, is there much left of Dickensian London?

Adventures in the USA