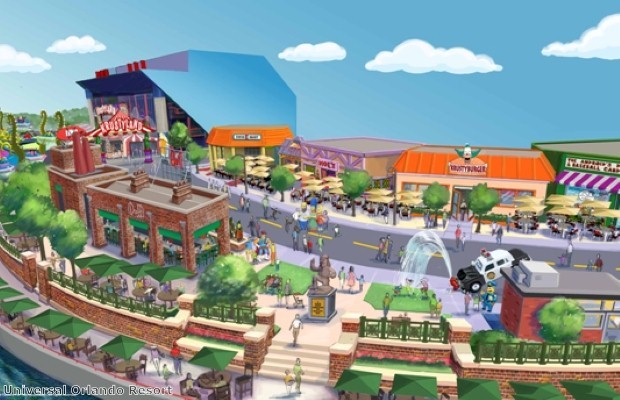 Want to walk the streets of Springfield?

The only place in the world where guests can walk the streets of Springfield, the expansive, new area within Universal Studios will be anchored by the mega-attraction, The Simpsons Ride.

It will also include locations and items (including  Duff Beer, brewed exclusively for Universal Orlando!) pulled right out of the show.

Simpsons fans will be able to walk down Fast Food Boulevard and visit the places that helped Springfield stake its claim as “Shelbyville by the Sea”.  They will be able to grab a Krusty-certified meat sandwich at Krusty Burger, snatch the catch of the day at the Frying Dutchman, get a slice at Luigi’s Pizza, go nuts for donuts at Lard Lad, enjoy a “Taco Fresho” with Bumblebee Man and drink at Moe’s Tavern.

The new attraction – called Kang & Kodos’ Twirl ‘n’ Hurl – will take “foolish humans” on an intergalactic spin designed to send them into orbit.

“This will be a must-see experience for Simpsons fans all over the world,” said Mark Woodbury, President of Universal Creative.

“For the first time ever, they’re going to be able to enter a world that they’ve only seen on television – and we’re really excited to bring that world to life,” he added.

Jeffrey Godsick, President, Fox Consumer Products added: “This new expansion will broaden and deepen the already incredible experience at Universal, by bringing to life the iconic landmarks of Springfield that fans have grown to love.

“Fans will literally be able to live and breathe Springfield as they visit the statue of Jebediah, enjoy a Krusty Burger, and have a seat at Moe’s Tavern, which are just a few of the great experiences awaiting at Universal.”

The longest running scripted show in television history, The Simpsons exploded into a cultural phenomenon in 1990 and has remained one of the most popular franchises, recognisable throughout the world. A 27-time Emmy Award-winner, The Simpsons celebrated its 500th episode in February 2012.

Children can experience the world of Despicable Me in newly-renovated, film-inspired suites, debuting this autumn at Loews Portofino Bay Hotel at Universal Orlando.

What is there to see around Corfe Castle?