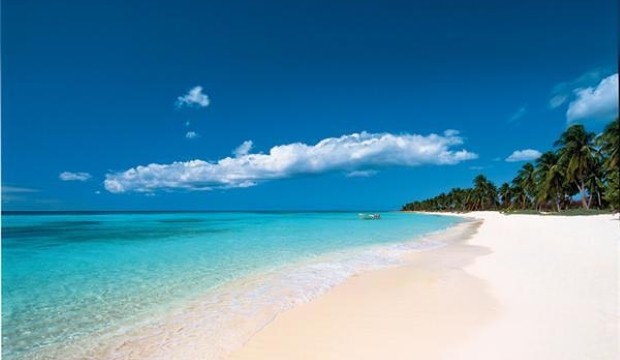 Spend seven nights at the three-star Sousa By The Sea Boutique Beach Resort, Dominican Republic, from only £818 per person with Cheapflights.co.uk.

There will be no shortage of things for travellers to see and do in the Czech Republic this winter, according to the national tourist board, with the carnival, or 'masopust', tradition set to bring a range of events and celebrations to the country over the coming months.

Dreaming of beaches, sunshine and a Caribbean holiday? Well, a 14-night holiday in the Dominican Republic with this travel deal could be just the answer.

Treat yourself to a late summer holiday in the Dominican Republic at the five-star Natura Park Eco Resort and Spa from Â£749pp, enjoying the vibrant towns and beautiful beaches around Punta Cana.

The Dominican Republic is located on the Caribbean island of Hispaniola, which it shares with Haiti.

The east coasts is home to luxurious resorts with pristine private beaches and the north coast is the place to go for diving, with its Atlantic currents and unique reefs. La Caleta, near Santo Domingo, is an underwater wonderland with a depth of 600 feet and a little over 600 square miles. Home to numerous wrecks – including the sunken ‘Hickory’ – which was sunk intentionally in 1984 to create an artificial reef.

The Dominican Republic has far more to offer than great beaches and diving however. Steeped in history, The Dominican Republic is a melting pot of European, African, and native Taíno Indian cultures. This is a direct result of its colonisation by the Spanish after the Christopher Columbus discovered it in 1492, naming the Island Hispaniola. Santo Domingo was the first capital city of the Americas.

Hispaniola experienced many changes of power, with the French colonising it in 1795. In 1822, the eastern part of the Island fell into the Haitians’ hands, until – finally – in 1844, the Dominican Republic was born.

The blend of cultures is very apparent in the Dominican Republic, particularly in the Island’s cuisine. Many of its dishes have a Latin American feel, however traditional Taíno Indian ingredients, such as yucca and plantains are used. The most common food on the Island is called La Bandera, or “The Flag”. It is made with meat, rice, fried plantains and red beans – distinctly Dominican.

There are many historic museums and buildings that take a unique look into Dominican culture in Santo Domingo. Among them are the Alcázar de Colon (Fortress of Colon), the Reloj de Sol (the Sun Clock) and the monasterio de los Padres Dominicos (the Monastery of the Dominican Fathers).

The annual carnival – a celebration of independence – is the best way to immerse yourself into the culture. Carnival lasts throughout the month of February, climaxing on the 27th.