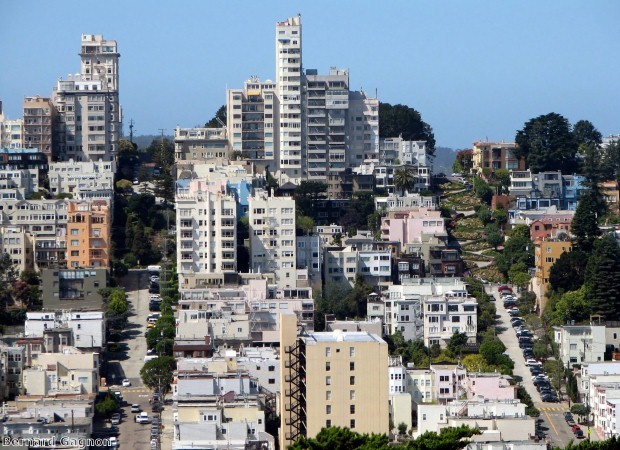 There are more than 100 neighbourhoods in San Francisco, meaning people who have booked cheap flights to the city should have a wide range of choices when it comes to things to see and do.

One of the more famous locations in San Francisco is Fisherman’s Wharf. The streets are a haven for tourists, offering novelty souvenirs, wax museums, countless seafood restaurants and some great views of the city.

However, if you have booked a cheap flight to San Francisco, you will likely want to see some of the area’s most popular attractions, such as Alcatraz.

The island has served a number of purposes over the years, including a prison, a lighthouse and a military fortification. Tours should be booked in advance as it often sells out, with visitors able to look around some of the old cell blocks that held infamous criminals including Al Capone and Robert ‘The Birdman’ Stroud.

Other sightseeing opportunities include Pier 39, Ghirardelli Square and the Cannery, as well as the local sea lions – with the marine animals attracting more than one million tourists each year.

San Francisco also boasts the oldest Chinatown in North America, with the area having the largest Chinese population outside of Asia. Rather than planning your journey through this fascinating neighbourhood, you should instead just wander the streets and see where the day takes you.

Saturdays are bustling, with many produce and live markets lining Stockton Street, where you may catch a glimpse of turtles and chickens exchanging hands.

If you are keen to see the sights, the Golden Gate Fortune Cookie Factory may be the best place to start. The store on Ross Alley is the only one in the city where the cookies are made by hand, with more than 20,000 of the treats being produced by just two women.

Alternatively, if checking out local architecture is high on your agenda, a daytrip to Nob Hill is a great idea. This swanky neighbourhood is famous for its signature buildings that border Huntingdon Park, with the Fairmont Hotel and Flood Mansion listed among the most stunning.

Despite its reputation of privilege – which dates back to the Gold Rush – Nob Hill exhibits an eclectic mix of personalities and storefronts, particularly as shops and houses spill over from neighbouring communities.

Restaurants in the area are plentiful and varied, offering everything from casual cafes and sandwich bars to upmarket four-star eateries.

If you are dining out for the night, Fleur de Lys provides top-quality fare, with head chef Hubert Keller dishing up five-course meals under a velveteen-tented exterior. Highlights include pan-seared buffalo strip steak and Hawaiian sea bass.

Hoping to escape the hustle and bustle of inner-city life? Bernal Heights is a relaxed mix of beautiful parks, suburbs and small markets. The neighbourhood is often overlooked as there are few buses that make the journey and it is located on a fairly steep hill. However, once you make it to there, you can enjoy some of the greenest outdoor areas in San Francisco.

Bernal Heights Park, instantly recognisable for being the huge grassy dome that overlooks the neighbourhood, is one of the best places in the city to obtain a panoramic view. A haven for dog walkers, the park is lush and green in the winter, fading to a dry brown in the summer.

Depending on what time of year you book cheap flights to San Francisco, Bernal Heights has a number of annual events that may be of interest, including the Hill-Wide Garage Sale, the Fiesta on the Hill street fair and the city’s Illegal Soap Box Derby, which despite its name isn’t against the law.

For a carnival atmosphere all year round, the Castro District is the place to go. Popular among San Francisco’s gay community, the area was originally just dairy farms and dirt roads. However, an influx of immigrants led to it becoming a vibrant community with boutique shops and popular bars.

June is probably the best time to explore the Castro, with both the San Francisco Pride celebration parade and the city’s International Lesbian and Gay Film Festival taking place during the month. If you do visit later in the year, the neighbourhood’s annual street fair is held in late October and features loud music, comedy and lots to eat and drink, as well as numerous stage shows.

Take the family on a camping holiday at Shell Island

See beautiful Mallorca in a hire car from Auto Europe