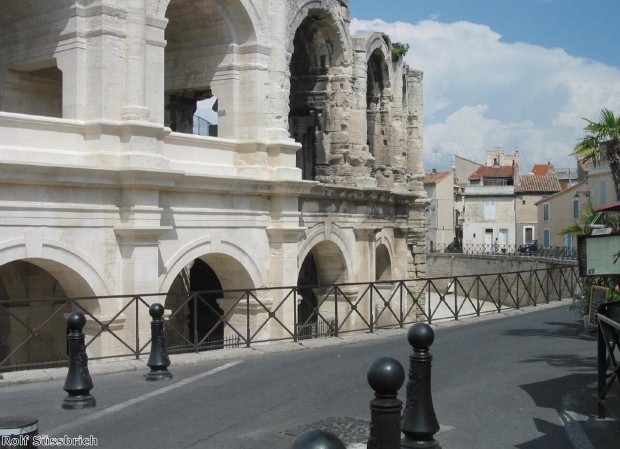 Arles is full of Roman sites

When considering school trips to Provence, the first subjects that come to mind are art and French. However, this region is also perfect for a classics tour, as it was once part of the Roman Empire and lots of evidence of that civilisation has survived.

Picturesque Provence was settled by the Romans in the 2nd century BC and they kept a presence there until the 5th century AD. They founded settlements like Aix-en-Provence and Narbonne, but the best locations to see their influence today are two much older cities – Nimes and Arles. Plan your trip around them and your students will be treated to some spectacular Roman relics.

Built in the 1st century AD, the arena is one of the best-preserved examples of a Roman amphitheatre in Western Europe and its 120 arches are an impressive sight. When it first opened, crowds of more 24,000 packed in to see gladiators fighting, but the venue is now used for bullfighting and concerts.

The Maison Caree is one of the few Roman temples to have survived intact and is a magnificent example of the architecture of the time. It was originally built by Marcus Vipsanius Agrippa and dedicated to his sons, Caius and Lucius, but has since been used as a church, stables and meeting hall. Today, it houses a fascinating multimedia presentation that tells the story of life in Roman Nimes.

Perhaps the most impressive architectural achievement of the Romans during their time in Provence is the Pont du Gard aqueduct. The three-tier bridge over the River Gard is now a UNESCO World Heritage Site, after inspectors concluded the engineers and designers involved had created a "technical as well as an artistic masterpiece".

Arles is packed with the remains of grand Roman buildings, including a theatre originally constructed in the 1st century BC. It fell into disrepair during the Middle Ages and the site was used for houses, but city authorities decided to excavate it in the 19th century. A number of columns and sculptures were discovered and they are now in Arles Archaeological Museum, while a more recent restoration exercise means visitors can see what the theatre would have looked like in its heyday.

One of Arles's most unusual Roman sites is Les Alyscamps, a necropolis located just outside the old town walls. It was the main burial site for the settlement during Roman times and later became a Christian cemetery, where the martyr Saint Genest was buried.

Top enchanting sights to see around the world