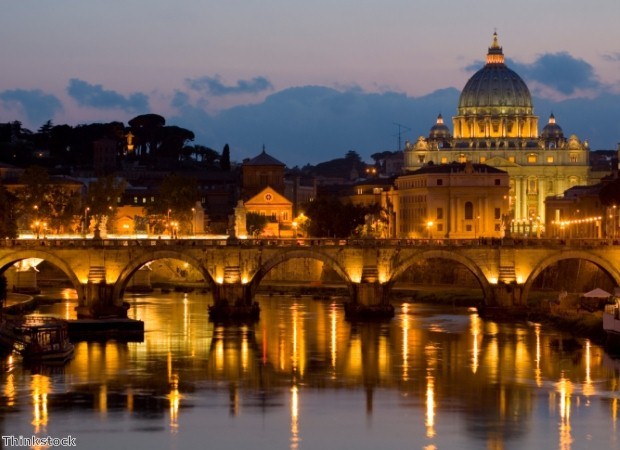 Amazing history and architecture, a rich culture and the wide availability of low-cost flights to Rome (click here for details) make the Italian capital one of the most popular city break destinations in the world.

Unfortunately, this can also mean large crowds at many of the main tourist sites, such as the Colosseum and the Vatican, particularly during peak season. But while this shouldn't put you off seeing these incredible landmarks, there are also a number of hidden gems around the Eternal City that are not only fascinating in their own right, but also provide a welcome break from the tourist throngs. Here we take a look at a handful of them.

Rome is home to more than 300,000 cats, many of which live not in homes but on the streets. Over the last few decades, a large number of these strays have made the ancient Roman ruins at Torre Argentina their residence of choice. A dedicated cat shelter, run by volunteers, has been set up at the site and looks after around 250 felines. It is open to visitors every day from noon until 6pm.

One of the best ways to escape the tourist crowds in Rome is to head underground. There are dozens of ancient catacombs and crypts beneath the city, many of which are open to visitors. And if you don't mind a bit of ghoulishness, one of the most fascinating and least well known of these is the Capuchin Crypt.
Comprising several tiny chapels located beneath the church of Santa Maria della Concezione dei Cappuccini on the Via Veneto, this remarkable crypt contains the skeletal remains of 4,000 bodies believed to be Capuchin friars buried by their order. Many of the bones are nailed to the walls in intricate patterns, others are piled high among countless others, while some hang from the ceiling as light fixtures.

A keyhole may not sound like one of the most exciting things to visit while in Rome, but the one on top of the Aventine Hill, in a quiet spot on the left side of the Tiber, is well worth checking out and is in fact one of the city's best kept secrets. The keyhole itself is located on a large door in the Piazza dei Cavalieri di Malta, at the entrance to the gardens of the Knights of Malta. Peer through it and you'll be greeted with one of the best views of Rome anywhere in the city, comprising a perfectly framed vista of the famous dome of St Peter's Basilica.

This really is the ideal place to get away from it all while on a trip to Rome. Built in the 18th century to house the bodies of foreign non-Catholics who could not be buried on Roman soil, this tranquil and beautifully landscaped cemetery is a calm oasis in the centre of bustling Rome.
Located on the Via Caio Cestio, it contains the graves of a number of famous scholars, painters, authors and diplomats, including the final resting places of the English poets Shelley and Keats.

San Lorenzo is a quartiere, or suburb, to the east of Rome’s historical centre and is the place to go for a taste of everything that's hip and trendy in modern Rome. Far away from the traditional tourist hotspots, here you'll find cheap and cheerful eateries, wine bars, pubs, night clubs and quirky shops, all with a relaxed, casual atmosphere.

Book Beachcomber Tours for luxury holidays of a lifetime – travelbite.co.uk