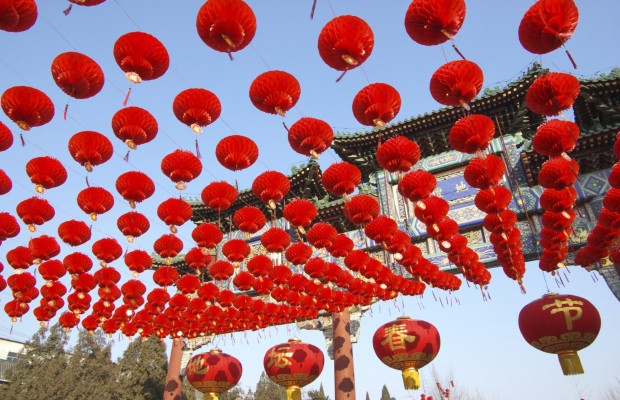 Here is Travelbite.co.uk’s pick of the best Chinese New Year celebrations in cities across the globe:

Beijing:
Beijing, the capital of China, is the heart of the Chinese New Year festivities. Celebrations include Spring Festival carnivals, Peking Opera, acrobatics and tea culture displays, but none more famous than the Temple Fair. Originally a religious ritual that took place in temples during the Spring Festival (Chinese New Year), these days they offer entertainment, traditional arts and crafts, cuisine, singing and dancing and a buzzing atmosphere of festivity. The Ditan Park Fair, Baiyunguan Temple Fair and the Changdian Temple Fair are some of the popular Temple Fairs in Beijing.

Hong Kong:
One of the most popular – and vibrant – Chinese New Year events is the The Cathay Pacific International Chinese New Year Night Parade, to be held on Januray 31st in Hong Kong. In true Hong Kong style, the city will welcome the Year of the Horse with festive flamboyancy and timeless traditions, including the big parade. This year, with the theme of New Year Party@World City, the parade will light up the city’s streets with illuminated floats and magnificent international and local performing groups. The festive, cheering crowds lining the parade route in Tsim Sha Tsui create a carnival-like atmosphere.

Singapore:
Singapore is ushering in the Year of the Horse with the annual Chingay Parade. In recent years, the festival has evolved with Asian and global influences, with approximately 2,000 performers from various clubs and schools taking part in colourful costumes, giving the parade a growing reputation as the ‘Mardi Gras of the East’. This year’s parade – themed ‘Fire in Snow’ – celebrates the strength of the human spirit in the face of life’s challenges, with fire representing power and passion and snow symbolising struggles and hardships, which are overcome by fire’s indistinguishable light of hope. Taking place on the 7th and 8th of February, Singapore promises a truly memorable celebration of the turn of the Chinese New Year.

San Francisco:
San Francisco’s Chinese New Year festivities are known to be the largest Asian celebrations outside of Asia. The California Gold Rush of the mid 19th Century ensured immigration to the city (a sleepy little village known as Yerba Buena), bringing with them their New Year traditions. Starting officially in 1860, the Chinese combined their customs with the American tradition of parades to create one of the best Chinese New Year celebrations in the world. From the newly-crowned Miss Chinatown USA to the spectacular 250-metre-long Golden Dragon (it takes a team of over 100 men and women from the martial arts group, White Crane, to carry this dragon through the streets!), San Francisco is the place to be to bring in the Year of the Horse.

London:
London’s annual Chinese New Year celebrations are one of the biggest in the world outside of China. Every year, thousands of Londoners descend on the West End to wish each other "Kung Hei Fat Choi" (Happy New Year). Festivities begin in the morning of February 10th with the New Year's Parade winding through London’s West End before reaching its final destination of Trafalgar Square. With China Town decorated to the max, traditional Chinese dragon and lion dances and a special fireworks display, London’s the place to party.

This Sunday (February 2nd) sees the long-awaited arrival of the 2012 Chinese New Year Celebrations in London.

Book the perfect south Goa getaway with Jewel in the Crown Holidays – travelbite.co.uk