In no particular order, here are our top travel reads of all time, from gripping travel tales that went down in history, to inspirational stories which make us reach for our passport:

On the Road by Jack Kerouac
Five decades after it was first published, Jack Kerouac's influential novel On the Road has finally found its way to the big screen. The film is set to be released in October this year and stars Kristen Stewart, Viggo Mortensen and a host of other big names. The novel chronicles Jack Kerouac's years travelling the North American continent with his friend Neal Cassady, defining the Beat generation of Underground America in the 1950s. As ‘Sal Paradise’ and ‘Dean Moriarty’, the two roam the country in a quest for self-knowledge and experience, with plenty of drama along the way. A modern classic.

Touching the Void by Joe Simpson
The book behind the BAFTA award-winning film, Touching the Void recounts Joe Simpson and Simon Yates's disastrous and nearly fatal climb of the West Face of Siula Grande in the Cordillera Huayhuash, in the Peruvian Andes in 1985. Simpson’s thrilling tale is regarded by mountaineers as one of the most incredible mountaineering tales of all time. A gripping read.

Eat, Pray, Love by Elizabeth Gilbert
Eat, Pray, Love is the heartfelt memoir of Elizabeth Gilbert and her decision to leave behind the trappings of American success, including her marriage, in order to find herself and what she wanted from life. Setting out for a year to study three different aspects of her nature amid three different cultures, Gilbert explored the art of pleasure in Italy and the art of devotion in India, and then a balance between the two on the Indonesian island of Bali. Eat, Pray, Love was made into a film, starring Julia Roberts, in 2010.

The Old Patagonian Express by Paul Theroux
Paul Theroux tells of his voyage from Boston, Massachusetts to the arid plateau of Patagonia, the southernmost tip of South America. A journey of contrasts in climate, landscape, people and personalities, Paul experienced plenty of adventures along the way; some horrifying, some hilarious.

Notes from a Small Island by Bill Bryson
In a national poll, organised by World Book Day in 2003, Notes from a Small Island was chosen as the book that best represents England.  After nearly two decades in Britain, travel writer Bill Bryson took the decision to move back to the States for a while, but before leaving his much-loved home in North Yorkshire, Bryson insisted on taking one last trip around Britain. His aim was to take stock of the nation's public face and private parts (as it were), and to analyse what precisely it was he loved so much about a country that produced Marmite, place names like Farleigh Wallop, Titsey and Shellow Bowells, people who said 'Mustn't grumble', and Gardeners' Question Time. A hilarious read! 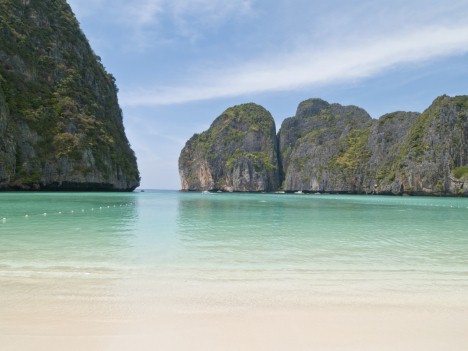 Maya Beach, in Phuket, was the main filming location in 'The Beach'

The Beach by Alex Garland
Made famous by the film (based on the book of the same name) starring Leonardo di Caprio in 2000, The Beach follows the life of Richard who hears of a secret island paradise from a strange character in a Bangkok hotel room. After receiving a map, he goes in search of the island idyll, promising hidden beaches, and a beautiful, secret civilisation – but the paradise he discovers isn’t all that it seems. One for the beach!

The Motorcycle Diaries by Ernesto "Che" Guevara
Written eight years before the Cuban revolution, The Motorcycle Diaries – written by the famed Che Guevara, a medical student at the time – recounts his journey on a 500cc Norton motorbike through South America in 1952 with his friend, biochemist Alberto Granado. Full of disasters and discoveries, Che Guevara is transformed by the odyssey and by the people he met along the way – helping him develop into the man who would become – one of the most iconic individuals in history. Inspirational.

Che Guevara through South America on a 500cc Norton motorbike

Seven Years in Tibet by Heinrich Harrer
Seven Years in Tibet is the incredible true story of Heinrich Harrer’s escape across the Himalayas to Tibet, set against the backdrop of the Second World War. A famed mountaineer, Harrer was climbing in the Himalayas when war broke out in Europe. He was imprisoned by the British in India but succeeded in escaping and fled to Tibet. He settled in Lhasa, the Forbidden City, and became a friend and tutor to the Dalai Lama; gaining a more profound understanding of Tibet and the Tibetans, than any westerner before him in the process. Brad Pitt starred in the film adaption, released in 1997.

Into the Wild by Jon Krakauer
Would you ever give up everything you know and all the money you own to start a new life in the Alaskan wilderness? In April 1992, a young man from a well-to-do family – Christopher Johnson McCandless – did just this. Four months later, his decomposed body was found by a moose hunter.  How McCandless came to die is the unforgettable story of Into the Wild, written by renowned mountaineer and author Jon Krakauer. In 2007, it was made into a film – directed by Sean Penn and starring Emile Hirsch.

Have we missed out one of your favourites? Comment below!

Fifty Shades of Grey most likely to be ‘dumped’

Fifty Shades of Grey has been revealed as the book holidaymakers are most likely to dump in their hotel room.

The St Pancras Renaissance Hotel has announced plans to partner with the British Library to create a bespoke holiday reading list for guests, compiled of Great British classics.

Why do you travel? To challenge yourself? Experience new things? Escape daily life? Whatever your motivations the following quotes sum up perfectly what inspires us to see the world:

Travel apps on a smartphone are the ideal way to quickly check a map, flight details or where there’s a good restaurant nearby.