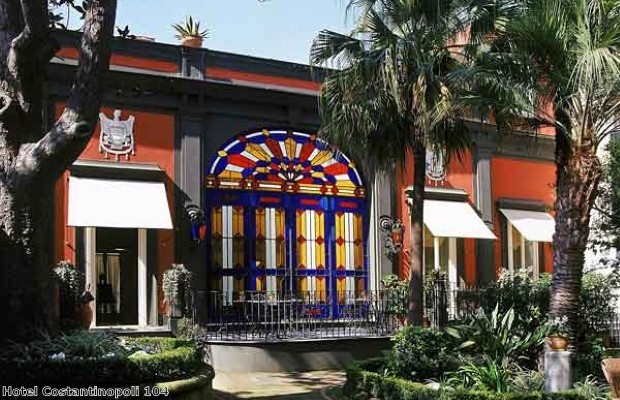 Hotel Costantinopoli 104 is a haven in buzzing Naples

There isn't really any other city in Europe quite like Naples. Maybe it's the narrowness of the streets, or maybe there's something in the water, but its inhabitants make even the phrase 'full of life' seem a bit flat. A bottle of the local bubbly wouldn't be fizzier than Neapolitans until you shook it up and dropped it out of a sixth-floor window.

The whole place seems designed to create havoc. Its streets are narrow but straight – perfect for unwise acceleration on the part of its many motorcyclists. In any open space bigger than a living room small boys boot red footballs around. The outdoor lifestyle means the city's elderly are always on the streets gossiping and laughing. Courtships and religious ceremonies take place next to each other. Navigating your way through all this requires care.

All the more important, then, that at the end of a long day spent being bewildered by the endless energy of Neapolitans you have somewhere to retreat. Fortunately there's no need to board a ferry to the islands of Capri or Ischia at either end of the Bay of Naples, tempting though that may seem. Amid the bustle of the city, Hotel Costantinopoli 104 offers an excellent way to escape the mayhem.

It's located close to the world-famous Museo Archeologic Nazionale and a step away from the historical Greco-Roman Decumano Maggiore quarter as well as the arty Piazza Bellini, where bohemian types hang out in defiance of the chaos around them. The cars and motorcycles zoom past. It's a miracle there aren't collisions every few seconds. How strange, then, to suddenly step through a gateway and leave that all behind. 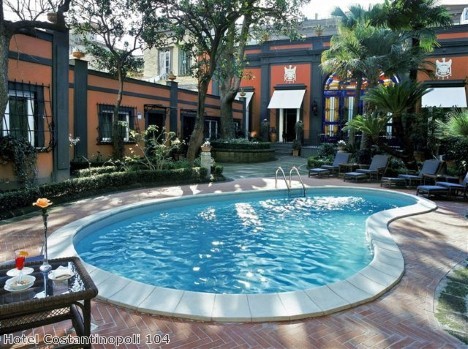 Through the hotel's piperno stone entrance is a leafy garden, with a small swimming pool and a terrace. The building, originally the Art Nouveau villa of one Marchese Spinelli, is a classic example of the Neapolitan Liberty style.

Its stained glass window, overlooking the small balcony where guests munch their croissants in the morning, seems to glow with its own light. The garden is an important part of the property: it's sitting here where the sense of being away from the rest of the city is at its greatest. And it's the exterior of the building which sends the strongest signal it's a period home, thanks to the Marchese's crests which still proudly adorn the facade and the marble balustrades.

Inside the arty theme continues, with pieces taken from a local museum of plastic art lovingly collected over the years. In the future modern art exhibitions and musical concerts are planned.

As well as the rooms inside the main building but there are also a number located on their own, their doors opening out on to either the garden or the roof terrace. Tall buildings surround this late 19th century structure, reminding you how much is within easy reach. "My hotel is like Riyadh, it's an oasis," manager Clelia tells me. She's right.

There are lots of interesting tourist attractions nearby, but at the end of a long day sightseeing there's nothing better than putting your feet up. Sipping a limoncello by the pool late at night, watching the bats flit around the illuminated waters of the pool, the city seems a long, long way away.

It's located amidst some of Campania's most jaw-droppingly attractive attractions: Capri, the Amalfi Coast, Pompeii. But Grand Hotel La Cocumella is so good, I'm told, that people come here to go on holiday and barely leave the grounds. Can that really be true? Alex Stevenson find out.

Seen from afar, Positano appears to cling to the Amalfi Coast.

Explore Everest Base Camp on a Nepal trekking adventure