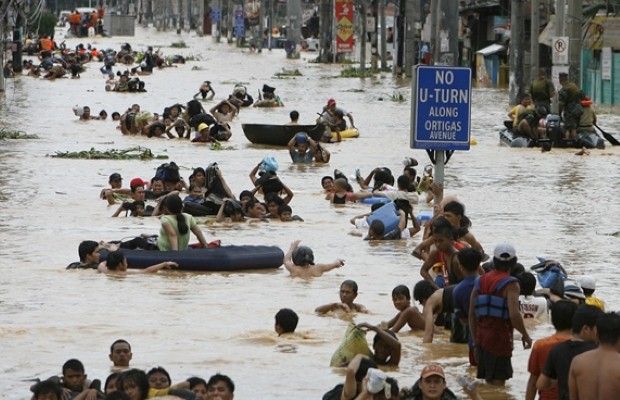 At least 240 people are now thought to have been killed and another 32 are missing after a severe tropical storm hit the Philippines.

The government has declared a ‘state of calamity’, with the death toll expected to rise over the next few days.

The tropical storm, know internationally as Ketsana and locally as Ondoy, brought more than a month’s worth of rain in just 12 hours earlier this week, devastating large areas of the country and leaving the capital Manila under water.

It is believed as many as 435,000 people may have been displaced by the floods, with rescue workers warning resources are wearing thin.

The National Disaster Coordinating Council (NDCC) has called for donations. They added that 7,908 people had so far been rescued.

At least 80 per cent of the country is believed to be under water, in what is being deemed the worst flooding to have hit the Philippines for 40 years.

People around the world have been using the micro-blogging account Twitter to call for support and donations to help those affect by the storms.

Some Tweets have also claimed there has been looting in some parts of the country, and one message read that crocodiles had escaped from a zoo adding to the dangers for survivors attempting to escape the flood waters.

In a statement on the government website, Philippines president Gloria Macapagal-Arroyo is said to be holding a Cabinet meeting with the NDCC tomorrow.

She is also said to have ordered an immediate investigation into the deaths of 13 people killed by a landslide.

Click below to see amateur footage of the devastation caused by the storm:

The latest information on from the National Disaster Coordinating Council can be found here.

The Foreign and Commonwealth Office (FCO) has revised its travel advice for the Philippines, in relation to the terrorist threat and the aftermath of tropical cyclone Fengshen last month.

Widespread damage from Tropical Cyclone Fengshen in the Philippines has caused the government to declare a number of provinces calamity zones, the Foreign and Commonwealth Office (FCO) reports.