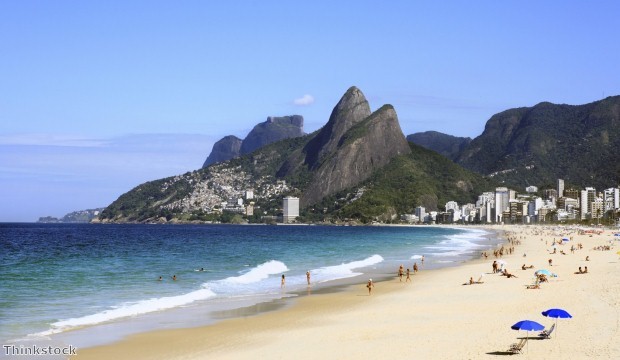 A visit to the thoroughly modern capital of Brazil promises an alluring mix of adventurous architecture sitting alongside lush, green spaces.

Rio de Janeiro is a vibrant haven for life-loving locals and tourists looking for carefree living.

The biggest city in Brazil and one of the most crowded places on the planet, Säo Paulo is a throbbing metropolis that has become the country's focal point for business.

Ahead of the World Cup draw on Friday the Foreign & Commonwealth Office (FCO) and the Football Supporters Federation (FSF) are teaming up to urge England fans to do their homework before booking travel to Brazil.

Bonito, a town in the west of Brazil, has been awarded Best Destination for Responsible Tourism.

As Brazil gears up to welcome 600,000 visitors to the 2014 FIFA World Cup next year, new figures released today by Embratur, the Brazilian Tourist Board, revealed international air connectivity to the country has increased 5.42 per cent year-on-year.

Brazil is one of the most popular destinations in South America thanks to the carnival atmosphere in many of its cities, long beaches and the mighty Amazon Rainforest.

Thousands flock to Brazil every year for the annual Rio de Janeiro Carnival – regarded as the biggest and brightest carnival in the world. A wild four-day celebration held 40 days before Easter, the Rio Carnival is considered an act of farewell to the pleasures of the flesh before Lent. It usually happens in February, the hottest month in the Southern Hemisphere, when the Rio summer is at its peak. Carnivals sum up the Brazilian culture – vibrant, vivacious and full of life. The highlight is the Samba parade – showcasing their national dance.

Rio de Janeiro, although not the capital, is the most well-known of Brazil’s cities. One of the most incredible cityscapes in the world, the city features skyscrapers next to beaches, the unusually-shaped Sugarloaf Mountain, favelas (slums) clinging to the steep hills and the iconic Christ the Redeemer statue standing proud over the city. The city also boasts two of the most famous beaches in the world – Copacabana and Ipanema (immortalised in the bossa nova song The Girl from Ipanema). Bustling with bikini-clad Brazilians and beach sellers – these beaches are the place to be in the city.

For pristine beaches, that are a bit more off the beaten track, holidaymakers should make their way to the charming colonial town of Paraty. Its cobbled streets and centuries-old abodes with colourful shutters make Paraty one of Brazil’s historical gems. Dozens of postcard-picturesque beaches are situated a short boat ride from the centre as well as superb snorkelling.

Ilha Grande is another hotspot for sun-seekers. Some 150km southwest of Rio de Janeiro, Brazil’s third-largest island has exotic scenery and stunning beaches. With no ATM’s on the Island, this is the place for those who really want to get away from it all (as long as you plan ahead!).

Undoubtedly one of the biggest draws is the vast Amazon Rainforest which dominates the country – the largest and most ecologically-diverse rainforest in the world; a mecca for adventure-seekers.