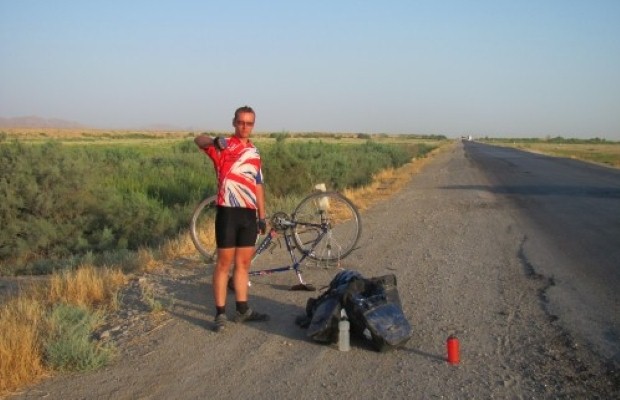 This year we’re following the odyssey of Peter and Christine Helliwell as they undertake an entirely self-funded bike ride from London to Sydney to raise money for charities Medicins Sans Frontiers and Mary’s Meals. The intrepid couple will be sharing their experiences in a blog for Travelbite.co.uk and here is their 22nd blog entry:

Because of the heat it makes much more sense to cycle in the mornings and evenings, and after leaving Acgabat we got some 60km done before the sun went down. It was great to be camping in the desert, in particular because of the amazing night sky.

Pete’s bike seemed to be working ok and we set off before sunrise the next morning in hopeful anticipation of a long day’s cycling – we had a bit of a tailwind so we were hopeful of smashing our previous daily distance record (155 km).

However, fate was once again not in our favour and we had done less than 5km when we realised there was another problem with Pete’s bike. The idiots at the bike shop in Acgabat had cheapskated us by using our old spoke ‘nipples’ with the new spokes, rather than using the spoke nipples that came with the new spokes.

They didn’t realise that our old spokes were thicker than the new spokes, and so the nipples were too big, with the consequence that the spokes kept coming loose. We retightened them, but they came loose in less than 5km – we repeated the process again but swiftly concluded that cycling was not going to happen without a new set of spokes – we were gutted!

Our hopes of cycling all the way across Turkmenistan in the five days allowed on our visa had already been greatly diminished by the time we spent in Acgabat – we would have had to cycle four consecutive 160 km days to complete the challenge – and now those hopes were completely dead.

We had no choice but to stick out our thumbs for a lift to the next big town, Mary, where we hoped to find some new spokes. Thankfully we had no problems hitching – the first lorry that came along stopped and agreed to take us the 300km to Mary.

Christine sat up front with the driver, but Pete had to lie down on the bed behind – legally the driver was only allowed to take one passenger, so Pete had to hide from view as we passed the many police checkpoints en route.

The road was bumpy and the suspension on the lorry decrepit meaning we were bounced around all over the place (the bikes were secured in the back and were fine). The poor road quality meant it took six hours to get to Mary, although it felt like much longer.

When we got there the lorry driver – who wouldn’t take any money for the trip – got some locals to show us the way to the market where there were some bicycle repair stands.

The bike mechanics there were more proficient than those in Acgabat and were able to put new, thicker spokes into the wheel to fix the problem whilst we sat drinking tea and chatting to a friendly crowd of stallholders from the market, the visit to the market being so convivial that we were almost grateful for the bike having broken to have had the experience.

We left Mary at around 5.30pm and cycled for around 40km until we spied a roadside restaurant that looked promising for some dinner and possibly a camping spot. We were just setting up when who pulls up but Dean – we had left him in Acgabat where he spent another night before bussing it to just beyond Mary (this had always been his plan as he wanted to spend more time in Acgabat) – and he saw us from the vehicle he was travelling in.

So he rejoined us and we had dinner – lovely shashlyk (grilled lamb) and samosas. The restaurant had both daybeds for sitting on outside as well as a few private rooms for eating in, the restaurant owners kindly agreed to let us sleep in one of the rooms (which had air conditioning!) for a small fee, which was really nice as sleeping outside is difficult when it is so warm.

The next day we left early as always and headed out into the main part of the desert. We had 220km of desert to cross in two days, and were confident of achieving this. This part of Turkmenistan is quite remote, with just a few small settlements strung out along the road, so it was important that we planned carefully to make sure we had enough water etc to last between the settlements.

Cycling into the desert in the morning was lovely and we really enjoyed the sense of wilderness, as well as seeing wildlife such as desert rats and foxes, and large birds of prey soaring above. However by 10am it became apparent just how tough the ride was going to be, as the temperature climbed to over 50c and the headwind picked up – the best analogy we can think of is cycling in a fan oven.

The wind is completely dry and hot so there is no cooling breeze to help cool you down. On the first day we were able to buy cold water every 20km or so, but the water was horribly hot and therefore not very refreshing within half an hour or less. We subsequently learnt that a good trick is to cover your water bottle with a wet sock; the water evaporating from the sock actually cools the water in the bottle down to a bearable temperature.

Unfortunately we didn’t know this at the time. In no time at all we were all hallucinating about ice cold water and Fanta (in our opinion icy Fanta is the best thing in the world for desert cycling.)

We stopped for lunch at a roadside cafe in the small village of Ravnina. After eating we asked if it was ok if we slept on our thermarests in a corner for a few hours – imagine doing that in a restaurant in the UK!

After sleeping and loading up our bikes with as much water as we could carry we set off around 5pm and cycled another 40km before camping on the sand under the stars again – magical although still unpleasantly hot (around 35 degrees C at night time).

For various reasons we ended up spending rather more time at the Uzbekistan border than we had anticipated.

We finally received our elusive Chinese visas in Tehran on the 1st of August.

Travel Blog: Caning it to KL

We had been told that there was a ferry at 13.30 leaving from the pier near to Phuket town, around 20km from the resort, so we left in plenty of time.

What to expect when hiking the spectacular Mount Kilimanjaro

Buy cheap flights to Goa through Jewel in the Crown holidays – travelbite.co.uk

How to spend a memorable weekend in San Francisco