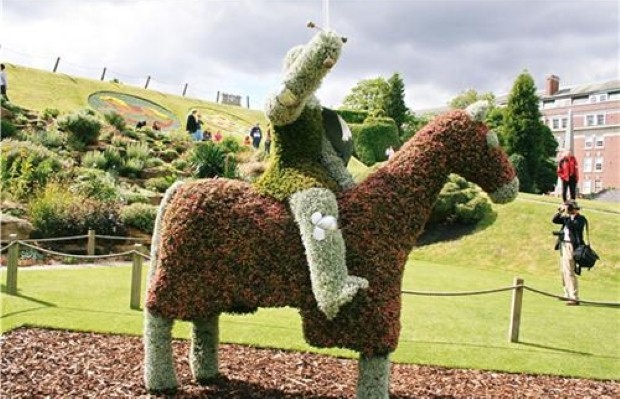 Following the announcement of the Britain in Bloom winners at the end of September, the Royal Horticultural Society (RHS) has compiled a list of the country’s top five garden locations.

The 69 finalists originally considered were evaluated during the summer by RHS judges as they travelled the length and breadth of the UK, using every conceivable form of public transport.

Each entrant was judged on their floral displays, permanent landscaping, sustainable development, environmental initiatives, public awareness and community participation – with the best singled out as potential hotspots for visitors over the next year.

Here travelbite.co.uk takes a quick look at the best of the best.

There are so many things to do in the city of Nottingham and the surrounding Nottinghamshire County – including the Galleries of Justice and City of Caves – that choosing the best is always a difficult task.

However, this year the RHS judges have identified the general cleanliness of the city and exquisite floral and residential areas as among the key attractions – naming it the best horticultural location in the UK.

In all Nottingham has eight local nature reserves, with RHS judges particularly impressed with Sellers Wood and Harrison’s plantation.

During the winter, tourists can visit one of Nottingham’s many parks and venture along one of a new series of walks – all of which have been mapped out in the parks of Arboretum, Lenton Recreation Ground, Melbourne Park and Southglade Park.

While in the summer, guests are invited to visit the showpiece – Nottingham Castle – or equally amazing Wollaton Hall – standing on a natural hill three miles west of Nottingham City Centre.

Wollaton Hall is set in five hundred acres of spectacular gardens and parklands, and draws particular praise from the judges.

Cricklade proudly boasts of its position as the first town on the River Thames, as well as of it rich historical past and traditions.

In awarding is the gold medal position for a small town, the RHS judges identified the unique North Meadow Nature Reserve

The reserve is about 20 minutes walk north-west of Cricklade town centre and is well worth a visit.

During the winter Cricklade museum also houses more than 8,000 items in its collection.

The main strength of the collection lies in objects from the 19th and 20th centuries, as well as access to resources for family tree searches.

Visitors looking for the epitome of village life need look no further than the village of Ravensfield in South Yorkshire.

The RHS judges thought this delightful community was a colourful and most attractively presented village in the whole of the UK. The location is also teeming with wildlife, visible along many wildlife trails.

During the summer, the colourful and most attractively presented village witnesses an exceptionally high standard of flora – clearly visible even if just driving through.

Awarding Clifton, near Bristol, the silver gilt for an urban community, the RHS judges noted the town can be proud of its fine quality landscape – identifying it as one of those places that seem to have it all.

Bristol’s new Botanic Gardens, nature reserves and special conservation areas – including the Clifton Downs – were all highlighted by the judges when making their selection.

The 12 acre Bristol Zoo – the fifth oldest in the World – in Clifton is also packed full of amazing animals and a wide range of seasonal family fun events.

Finally, the island of Herm is the perfect holiday destination; with no cars and no congestion it simply offers stretches of unspoiled beach and a very warm welcome from local residents.

Judges noted that the Mermaid public house and the two beach cafes as being delightful.

The judges found the management of natural areas, including the sand dunes and common excellent, especially the lush tropical displays.

British interest in holidays in the UK grew steadily over the first quarter of 2009, with a clear interest in camping and caravanning, according to new directory enquiries data released today.

UK short breaks on the Isle of Wight

In the present financial climate, holiday-makers can be forgiven for looking at destinations a little closer to home when planning breaks away this winter.

Up to 12 million adults plan to take their main holiday in the UK this year, new research has revealed. This represents nearly a quarter of the adult population.

Holidaymakers are invited to take a three-night UK break this May half-term from Ã‚Â£229 per family – a saving of over Ã‚Â£100.

Taking your dog on holiday to Wales | Activity Wales | travelbite.co.uk