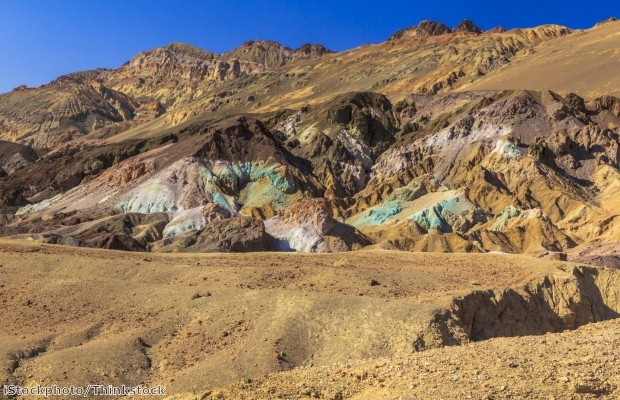 Death Valley holds the record for the hottest placeon Earth

Temperatures on Blighty’s shores may be hitting toasty (and very welcome!) highs of 30°C this week, but wait until you hear how hot these destinations around the world get…It’s enough to get you running to the fridge for a cold beverage!

Death Valley, California
On July 10th, 1913 the weather observer at Greenland Ranch in Death Valley, California recorded a temperature of 134°F (56.7°C). This is the highest reliably recorded air temperature on Earth and the National Park still retains this record to this day. In fact, 100 years after this record, the park is experiencing a serious heat wave to rival it, with temperatures nudging 50°C. This has led to a horde of tourists (messily!) attempting to fry eggs on the ground, much to staff at the National park’s annoyance…

El Azizia, Libya
El Azizia, Libya, used to hold the record for the hottest place on Earth, but its title – long thought dubious at 58°C – was overturned in 2012, passing to Death Valley, California, after an in-depth investigation by a team of meteorologists. It may not be the record-holder, but one thing’s for sure – it’s blisteringly hot.

Dallol, Ethiopia
Dallol currently holds the record high average temperature for an inhabited location on Earth, where an average annual temperature of 35°C (96°F) was recorded between the years 1960 and 1966, when it was a mining settlement. Dallol is also one of the most remote places on Earth, with only the odd camel roaming its sparse lands. With temperatures like that, it’s not hard to see why.

Dasht-e Lut, Iran
The World’s hottest land surface temperature was recorded in the Dasht-e Lut desert in Iran at a scorching 70°C! The hottest part of Dasht-e Lut is Gandom Beryan, a large 190 square-mile plateau covered in dark lava. According to a local legend, the name (translated from the Persian name meaning "scorched wheat") originates from an accident where a bag wheat was left in the desert and was eventually scorched by the heat in a few days.

Oodnadatta, Australia
Oodnadatta is known as Australia’s driest state and holds the all-time Australian record temperature of 50.7 degrees set on January 2nd 1960. The barren South Australian Outback town may even bypass that record this year too as temperatures have been hitting extreme highs of over 48°C in the last few weeks; it’s so hot that petrol stations have reportedly stopped selling petrol.

If you find it hard to relax on holiday or are always looking for things to do travelbite.co.uk's top 5 extreme holiday ideas might be a good place to start.

Make your accommodation part of the holiday fun!

Here’s our top five cinema-themed places to stay for film fans on all budgets:

Times are a changing in the United States today as president George Bush leaves the Oval Office for the final time – to be replaced by Democratic president-elect Barack Obama.

Take a break at the beach with self-catering cottages in Cornwall – travelbite.co.uk