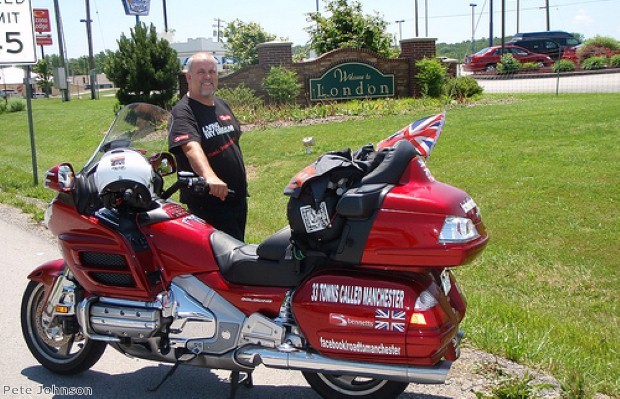 I apologise in advance for tonight’s brief blog, but man – what a gruelling couple of days! I’ve covered 351 miles and in a word, it’s been ‘scorchio’! The average temperature has been 83°F, with a high spot of 109°F (!!) and I’m feeling pretty exhausted. I’ve spent 11 hours on the bike today and my sat nav has got me lost around a dozen times today – maybe it doesn’t like the heat either!

Anyway, I’ve reached Boone in the Appalachian Mountains, and I’m off to bed before I collapse – good night all!

From Boone to Harwood Country
This morning I took the Blue Ridge Parkway from Boone and I have to say, it had some of the most stunning views and best riding that I’ve experienced on this trip. The surface is great, the bends are sensational and every corner offers a beautiful new vista.

I was climbing higher and higher, eventually up to 3,500ft, but the peaks were still towering above me. The sat nav didn’t enjoy it quite as much as I did though – it was determined to make me take the fastest route and kept giving some very odd directions!

It was another warm day, but as I approached Waynesville, Haywood County, I noticed it getting darker and cooler and thunderclouds started to gather. I hit the first hotel I saw and booked in – a good decision, as within 20 minutes it was coming down with a vengeance. There was thunder, lightning and heavy wind and rain!

Tomorrow I hit the dragon’s trail, but this is definitely an area I’d return to! I have to say, I am really loving my Bennetts Biker Dream right now! 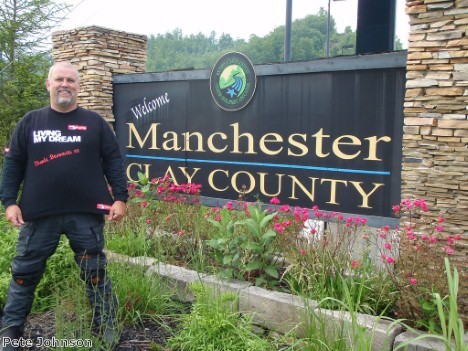 Manchester, Kentucky via the Dragon’s Tail…
Well, today I covered a pretty impressive 381 bends in just 11 miles! That is some one seriously twisty route! The road I’ve been on is called the Dragon’s Tail (you can probably guess where it got its moniker) and it’s 4,500ft up a mountain.
It’s part of a secret bikers’ paradise in the USA which we know little about in the UK. There are a lot of really special roads up in the Appalachian Mountains, but the Dragon’s Tail is truly one of the best. It’s a route which features on the ‘bucket list’ (ie: a list of things you wish to accomplish before you die) for many a biker and I met many different guys on many different cycles today, all of whom were here for the same thing.

The area is just brilliant, the roads are mind-boggling, the people friendly, and the experience is life changing. If there are better roads out there, I certainly haven’t ridden on them yet.

PS – made it to Manchester, Kentucky!

It’s another hot day, with temperatures in the 90s and I had a pretty eventful evening yesterday! I tried to check in at the first hotel I found, but unfortunately, it was full. Or it was, until a man known as Jonny One stepped in. Jonny is the boss of a group of men working just down the road, on the construction of a coal power station and he insisted that he and his team could provide me with a bed. The guys have all been posted here for a month and are now well settled in. After some discussion, it was decided Jonny One would bunk with someone else on the team and I’d have his room. What an absolute gentleman – friendly and helpful beyond anything I’ve encountered on my trip so far.

We had a great evening by the hotel pool, joined by Jonny Two, who is a tobacco chewing Liberace lookalike, Jeff, and a few other guests. We all shared a BBQ of steak and salad.

One thing about Kentucky – many of the towns are dry. Not a drop of alcohol to be bought. The guys make a 40-mile round trip to stock up on Miller, buying ten 32-can packs at a time to get round the problem. As they say – this corner of Kentucky is a little damp.

Despite having a great time, I’m a little homesick for my family and my dogs today.

Just a brief update today. I set off nice and early this morning, accompanied by a nice cooling mist. It started off a warm 72°F but was soon up to 80°F and peaked at a pretty toasty 94°F. I’m en route to Manchester, Tennessee now, after a drive along Route 27, via Burnside, Kentucky.

A very productive day, as I covered 314 miles. Tomorrow I’m aiming to tick two Manchesters in two different locations off my list!

Follow Pete Johnson's biking journeyas he visits all 33 Manchesters in the US and Canada as part of the Bennetts Biking Dream 80th anniversary campaign.