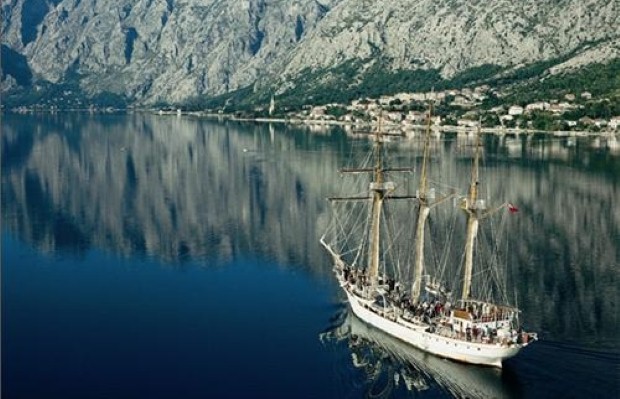 There’s not a moment to lose if you want to be bewitched by the simple charms of Montenegro.

The Land of the Black Mountain won its independence just two years ago and is now experiencing a flood of investment, as tourists and businesses alike begin to realise just what a fantastic gem this small Balkan state is. You had better hurry up, however, as nowhere so appealing will stay unvisited by most for long.

Montenegro’s biggest appeal is summed up by the unspoilt nature of its interior. That doesn’t mean it’s not undeveloped. It’s more that, being a land whose geography can be described as ‘steep’, there’s simply no room for sprawling hotels or gaudy resorts. Instead it is dominated by forest, open grassy hills and narrow, picturesque valleys.

Small settlements dot the landscape, alongside a number of monasteries. One of the most beautiful of these is Moraca, founded in 1252. In a region so frequently blighted by conflict in recent years, Montenegro is now a land of peace.

Nowhere is this sensed more clearly than on the shores of Lake Biogradksa, nestled in the middle of a primeval forest. The lake is perfectly sized, taking around an hour to walk around. Some of the trees nearby are among the oldest in Europe: the oldest began their lives well over 1,000 years ago.

To really soak up the atmosphere in the shadow of Crna Glara, it is now possible to hire small wooden cabins for just ?10 a night. They could bottle the serenity here.

On the inland plateau before you reach the mountainous inland region, the mood is more rugged. The drive from the coast to Cetinje, Montenegro’s sleepy spiritual capital, traverses through seemingly endless countryside of hilly Mediterranean maquis.

The rock emerges sporadically, strikingly demarcating the limited nature of human habitation. It is perfect guerrilla country – and Montenegrins have had quite a history of hiding out from invaders throughout their history.

Fortunately the locals are much more welcoming these days, so make sure to stop in some of the small roadside inns which offer excellent local cuisine and wine.

Montenegrin cuisine shows off its Ottoman heritage in the form of excellent grilled meat dishes like raznijici (shish kebab) and cevapcici (meat fingers). Montenegro wines that are worth seeking out include Vranac, a fruity dry red, and Krstac, a full-bodied fresh-tasting dry white. And then there’s loza, the local firewater. Maybe better to save this for later in the day.

The best food is to be found around Skadar Lake, one-third of which is Montenegrin (Albania holds the rest). This is the largest inland lake in the Balkans and its approaches from the capital Podgorica, are carefully guarded by two rounded hillocks affectionately referred to as ‘Sophia Loren’s breasts’ by. well, just about everyone.

After the cool of the mountains the atmosphere in the summer here can be swampy, oppressive and hot. It’s worth it for the fish, however. Whether grilled and basted in aromatic herbs, poached or fried, you’re in for a treat.

Montenegro’s identity has been shaped by its guerrilla past, preserving a national character from the many warring forces who have sought control of the Balkans over the centuries.

Nowadays that spirit is best preserved in the far north of the country, where the topography is at its most extreme. The minaret of Husein Pasha Mosque in Pljevlja, on the border with Serbia, is the highest in the region.

The Durmitor national park offers some challenging skiing close to the highest summit in the country at 2,522m. And even more adventurous tourists could try mountaineering in the thoroughly extreme Kormarnica river region.

Its Nevidio canyon is the most impassable in the world – quite a challenge and beyond the reach of most. The Tara canyon is more widely accessible and the drive up to Kolasin from Podgorica offers some dizzying views down to the waters far below.

But it would be wrong to portray Montenegro as purely a mountainous country as the coastline also holds some fascinating history. Some fascinating geography, too: Boka Kotorska Bay is the southernmost fjord in Europe, hundreds of miles south of Norway.

Flights into Tivat pass Herceg Novi, at the mouth of the fjord, and cruise along the first and second of its three bays before touching down, only a few feet from the water’s edge, at the one-runway airport.

The steep-sided hills overlooking the fjord make for some impressive scenery. And if you tire of that, just a couple of bays along the coast is Budva.

Here, if anywhere in Montenegro, tourism has definitively arrived. Budva is a resort, no doubt about it. Property prices are booming, it seems like most of its hotels are under construction and the beaches are well laid out and mostly packed with Russian tourists.

It’s the place to come for glamour, or for a more traditional tourist experience. Certainly the night life of Budva’s old town, a smaller-scale Dubrovnik, is worth looking into.

But it also has some interesting historic buildings, like its citadel. While Sveti Stefan, the small village stuck on an island linked to the mainland by the narrowest of causeways, is just down the road.

If one has to pick out a highlight from the country, Kotor wouldn’t be a bad choice. This medieval town still has its centuries-old street layout which makes exploring its nooks and crannies thoroughly enjoyable.

There are cafes and restaurants galore – but even the simple charms of its many squares, often with a small church placed at an incongruous angle in the middle, mark Kotor out as being just a bit different. Those feeling energetic can clamber on the city walls, climbing high above, for just ?2 a pop.

The best view of Kotor is on the ‘road of love’ leading up the steep slopes behind. Its architect put in some unnecessary additional switchbacks which, from above, can clearly be seen to make out the letter ‘M’. That was the initial of name of his love, the queen of the time.

It’s certainly an impressive route, slowly revealing the many castles, forts and settlements to be found nearby. One of the many available hiking trails, clearly marked, offers a six-hour trek up to the same viewpoint.

From there, the road leads into the interior – and Montenegro’s heart. Those who love beauty and unspoilt solitude in the mountains should take it while they still can.

For a country that is only two years old, Montenegro has a lot of history. The citizens of Montenegro are the tallest, on average, in Europe and the country is standing tall among its regional and continental equals.

Guests can this week head to Montenegro – courtesy of specialist operator Holiday Options – and save up to Ã‚Â£165 per person on week-long breaks.

Guests can this week travel to scenic Montenegro and discover the country's natural beauty and intrinsic charm with Page & Moy.

Although Cyprus has a lengthy, illustrious history of wine production, the passion was somewhat lost to an intoxicating mist during the twentieth century.

What to see in Australia

What kind of sailing holidays are there?

Experience a whole new world on a gap year to Asia