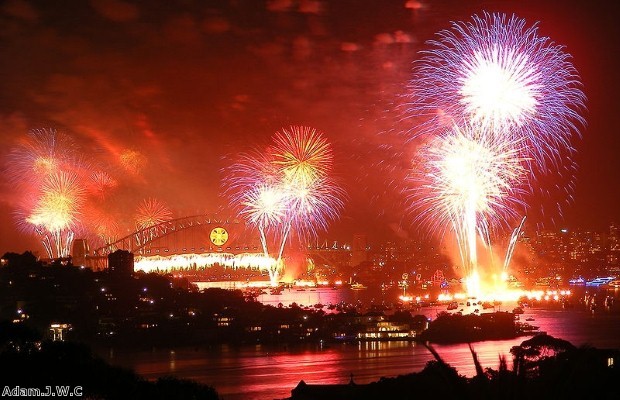 The Sydney fireworks are on the the most famous displays at New Year's Eve (photo: Thinkstock)

All over the world, New Year’s Eve is celebrated with pomp and pageantry, fireworks and New Year’s resolutions. Whether having a quiet drink with friends or partying until dawn, welcoming in the New Year in style is a must.

Here are our pick of New Year’s Eve celebrations in some of the world’s most iconic cities:

Edinburgh
Promising not just one but three incredible days of cultural highlights and massive outdoor events, head to Edinburgh for Hogmanay – one of the world’s biggest street parties, with around 80,000 revellers from over 60 countries flocking to Scotland’s capital to bring in the new year in style. With five live music stages, headline DJ’s and bands– including Mark Ronson and Friendly Fires – as well as spectacular firework displays and parades, a new year’s eve in Edinburgh will be the perfect start to 2012.

New York
Hang out with approximately one million other revellers in the famous Times Square for the New Year’s Eve Ball Drop – a global tradition since 1904. Raised atop a flagpole on One Time’s Square building, the sparkling Waterford Crystal ball is lowered in time with the New Year countdown. Opening ceremonies begin at 6pm when the New Year’s Eve Ball is lit and raised up, followed by musical performances, hourly countdowns and lastly a huge pyrotechnic display.

Sydney
New Year’s Eve in Sydney is all about the fireworks – a spectacular display which fills the night’s sky with vibrant colour, illuminating the iconic Sydney Opera House and exploding over Sydney Harbour Bridge, to a soundtrack specifically created for the event. The harbour and Light Parade, which follows the 9pm fireworks, has become synonymous with New Years Eve and involves more than 50 vessels, including tall ships parading around the harbour festooned with twinkling lights. Sydney is certainly the place to go if you’re after balmy weather at New Year; what’s more, you can recover the next day on the beach!

Las Vegas
Head to the world-renowned city for fun, revelry and partying – the one and only Las Vegas – for the biggest party of the year. The strip-lit sin city boasts a dazzling fireworks display, as extravagant as the city itself, which this year has expanded to eight rooftops. After the show, head out to one of the array of glamorous events across the city, including Stevie Wonder at The Chelsea at The Cosmopolitan, Will.i.am at Encore and Kim Kardashian hosting NYE 2012 at TAO at The Venetian.

London
London’s iconic landmarks come to life on New Year’s Eve during the Lord Mayor’s midnight fireworks display, which centres around the London Eye. Attracting roughly 250,000 people, the dazzling display includes a specially created soundtrack, as well as with Radio 1 providing entertainment up until ten o’clock. And it wouldn’t be London without the chimes from Big Ben leading up to the impressive fireworks, marking the beginning of the new year. After the pomp and pageantry, London’s plethora of bars and clubs are at your disposal (just book in advance!).

Are you looking for New Year's holiday ideas for 2011 but weary with all the disappointing party hype?