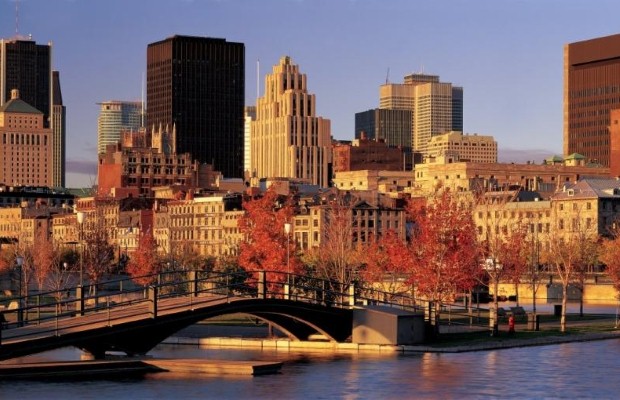 Andy Mossack explores the sights and attractions of Montreal – Canada’s ‘second city’ – delves into its rich history and tries his hand at pasta-making.

Marie was gazing at me intently. She had been for a few minutes now and her rock steady stare was more than a little disconcerting I can tell you.

I’d like to say she was hopelessly intoxicated by my rugged good looks and international reputation, sadly though, it was a result of my feeble attempts at following her directions for rolling paper thin pasta.

Marie, senior chef at The Europea, one of Montreal’s top restaurants and daughter of famed two-star chef Jean Andre Charial, was giving up her culinary secrets in the restaurant’s hallowed kitchen where she conducts regular cooking lessons. It’s just one of a host of unusual activities you’ll encounter in Montreal.

John and Yoko recorded ‘Give peace a chance’ during their week long ‘bed in’ at the Fairmont Hotel in Montreal in1969, but peace is not something you could necessarily lay at Montreal’s historical doorstep. After all, it took seven years of fighting for the British to finally wrest control of Quebec from its French rulers back in 1760.

But Montreal owes much of its success to its immigrant past and today one in three Montrealers is from immigrant stock. A steady stream of Irish, Scots and English came over to develop the roads and railways and it didn’t take long for Italians and Eastern Europeans to join them.

Saint -Laurent Boulevard became the unofficial dividing line between the original French speakers living on the east side and the English speakers on the west. In the end though, east blended with west and led to the emergence of Franglais, a curious blend of French and English phrases.

Montreal is justly proud of its French language and heritage, (who wouldn’t relish good French cuisine) but that’s where the similarity ends.

Montrealers are simply North Americans who happen to speak French (Canadian French is different from classic French by the way) and they have a real fondness for their British cousins. Not a gaulic shrug in sight!

Just a five and half hour flight from London, Canada is somewhat off the radar for British tourists; our perception of it perhaps, a snowy wilderness frequented by Moose and huskies, yet Canada’s second city is just 45 miles from the US border and maybe an hour or two more to New York.

It’s a lively, contemporary and stylish city with some outstanding attractions for visitors of all walks of life to enjoy. Just 90 minutes or so in one direction is the international skiing resort of Tremblant and in the other, the colonially historic Quebec City.

To discover Montreal’s past, is to understand what makes the city really tick, and an absolute must first stop is the museum complex at Pointe -a -Calliere, an historic building right on the spot where the city was born.

It’s amongst the cobblestones and carriages of Old Montreal and the museum portrays the city’s six centuries of history through a combination of stunning multimedia technology projected amongst the archaeological remains, with easy to understand models, maps and displays.

Just around the corner the Centre d’histoire de Montréal is also well worth a visit.

Many of the charming 18th and 19th century buildings all around the old town have become fashionable art galleries and designer boutiques, blending in perfectly without losing the sense of romance from a time gone by.

The centrepiece is the Place Jacques-Cartier with its cafes, terraces and street performers, and the nearby extraordinary Notre Dame Basilica, whose façade belies the sheer majesty of its interior. You should keep that romantic thought and take a horse drawn caleche around the cobbled streets to really capture the moment. 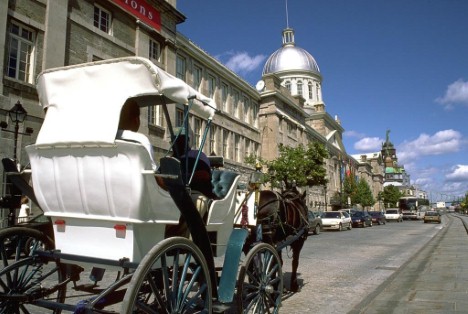 The river fronted old port area, once a bustling harbour, rounds off historic Montreal, providing the perfect outdoor space to walk, cycle, and meander along the quays.

There’s also the huge Science Centre here with its IMAX theatre, a real treat for kids and adults alike. This is the home town of the world famous Cirque de Soleil and their headquarters are based right by the port. Every summer the big top goes up to preview their new shows which are always performed here first before they go out on tour.

Montreal is easy to orient yourself to. There’s the majestic Mont Royal dominating one side (the city took its name from this iconic mountain which is surrounded by a lovely national park and offers a great view of the city by the way) and the mighty St. Lawrence River on its opposite flank, once the gateway to America.

It’s a city you can walk freely around, each neighbourhood is represented by a different set of lampposts; (count them, there are over forty two different ones!) or if you’re felling lazy, take the Metro.

It’s a comprehensive network that’ll get you to where you want to be in a matter of minutes, many of the stops taking you directly up into hotels and shops as part of the Underground City (see below).

Schwartz’s smoked beef is something of a Montreal institution, and though these days there are many other deli’s offering smoked meat dishes, it’s Schwartz’s that’s still considered the best.

Rueben Schwartz was a Romanian immigrant working as a deli delivery boy in 1928 and he soon realised that the meat he was delivering was nowhere near as good as the smoked meat he used to get in his native Romania.

So he got himself a tiny restaurant at 3895 Saint-Laurent Boulevard in Montreal’s Jewish immigrant area, and began selling smoked meat cooked in the traditional Romanian style.

82 years on and Reuben is sadly no longer with us, but his restaurant most certainly is, selling the same dishes prepared in the same way they were when he first opened the doors.

The cramped little restaurant is still frequented by Celine Dion, Halle Berry, Angelina Jolie and a host of other celebrities; you just never know who you might bump into.

Downtown the city is a study in contrasts. Old Victorian brownstones sit side by side with skyscrapers, and the day time shopping, restaurant and gallery set give way at night to the terrace and bar scene with live music and plenty of street activity particularly along Saint Catherine Street – the ten mile long artery that’s home to the major stores and restaurants and no fewer than nine metro stations.

It’s the lively heart of the city with more than enough eateries and bars to suit all tastes, just take a stroll along it and you’ll find something.

While we’re on the subject of street walking, you might have heard of Montreal’s Underground City? Far from being a real underground city, it’s just a network of pedestrian walk ways and tunnels that simply connect most of the major locations to each other.
Its steady year round temperature ensures that during the freezing cold winters and the often very hot summer months, Montrealers can go about their business uninterrupted.

Montreal is an island. It really is! And it has a couple of nosy neighbours too; Ile Sainte-Helene, a lovely park area with lots of outdoor activities and home to La Ronde a Six Flags roller coaster park, and the smaller Ile Notre-Dame, which is mostly taken up with the F1 grand prix circuit, which amazingly is left open all year, but there’s a beach here and some excellent nature trails.

My favourite attraction though is the Biodome. The Hochelaga-Maisonneuve neighbourhood in the East of the city was the 1976 Olympic site (the original stadium is still used today for rock concerts and exhibitions and you can take a ride up to the roof for a stunning view) and the Biodome is in what was the old Velodrome cycle arena.

In 1992 it was transformed into a replica of four separate regions from North and South America, each with its own climate and seasonal variations. There’s a South American tropical forest, a Laurentian forest, an underwater marine system and an Arctic and Antarctic polar world.
In here, amongst the cliffs, waterways, vegetation and fauna, fish, birds and animals are free to wander and fly in their own individual ecosystem. I absolutely loved it and it shows just how you can regenerate a potential white elephant into something quite extraordinary.

Montreal has a unique feel about it. It’s very alternative, bohemian, quirky and contemporary and with its huge emphasis on performing arts and culture you’re never far from a museum or a show. No wonder John and Yoko stayed here for a week and talked about peace and love.

My pasta lesson ended on a joyous note. Marie was so thrilled with the way her new protégé went about his craft, I swear she had a smile on her face when I left. Unless it was just pity of course.

Getting there:
Over forty major carriers offer direct flights including Air Canada and BA
Where to eat:

Deeply rooted in the soil of North America and fiercely proud of its French heritage, the province of QuÃƒÂ©bec is a delightful blend of the Old and New World.

For 11 days each year, Montreal becomes the capital of Jazz.

Summer in the city of MontrÃ©al

Nestled in the province of QuÃƒÂ©bec, the city of MontrÃƒÂ©al is a cosmopolitan combination of old world European charm and American posture – just packed with great holiday ideas in Canada.

Brits rate New York and Sydney above their own capital city as a global brand, new research shows.

Make your holiday your own with a rented villa