Holiday ideas in Scotland: a Scottish pilgrimage to the Island of Iona | Travelbite.co.uk 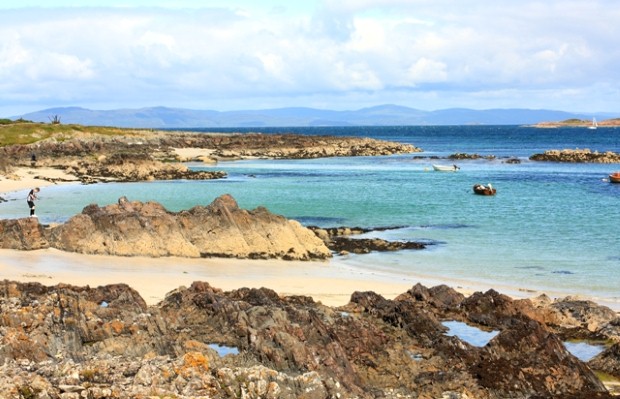 The island of Iona has a rich and interesting history

Visitors to Iona have included saints, Highland kings and marauding Vikings, as well as countless people seeking spirituality. Judy Darley discovers that, religious or not, you’ll find the island rewards you (though you may need to go through hell and high water to reach it!).

The day we set out to reach Iona, we’d been warned that the ferry might not sail. Throughout the hour-long journey from Craignure to Fionnphort, rain poured down the windows of the bus and transformed the landscape of Mull into a smudged watercolour painting, heavy on the water.

Moments after we reached the port, however, the ferry appeared, tipping and bucking valiantly across the Sound. Then, we were on our way across the narrow, but seemingly furious, channel of water that separates Mull from its tiny neighbour, the holy isle of Iona.

Iona has been attracting pilgrims since St Columba arrived in 563AD and built a monastery there, providing the islanders with a hospital, school and church in one. Vikings attacked the tiny strip of land in later centuries, eventually replacing the long-abandoned monastery with the abbey (pictured below) that still stands today. 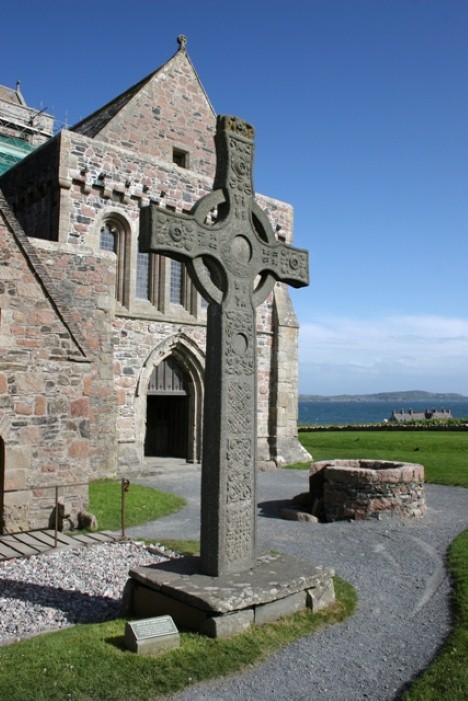 Three days earlier, in a Glasgow pub, whisky aficionado Victor Brierley had tried to sum up his own impressions of Iona. “It’s got something about it, you don’t have to be religious to feel it, it’s just there, in the air, like at Stonehenge.” Victor is one half of Glasgow Whisky Tours  – a six-month-old company that’s already won several tourism awards.

That evening we visited traditional pubs such as The Halt, the wonderful gastro-pub Stravaigin (Gaelic for ‘a wee wander’), and the lively little Dram, where walls of whiskies boggle the eyes before they even reach your throat. Our last pub of the night was also Victor’s local, The Ben Nevis, which he described as “a small but perfectly-formed traditional bar”.

They proved the ideal settings for sampling some of the national drink, from a flowery ten-year-old Balvenie with a distinct honey bloom, to Glasgow’s local whisky, a caramel-smooth slow sipper made by Auchentoshan. My favourite was the most unlike any other I’ve tasted, a12-year-old Caol Ila with a richly layered mineral and peat flavour and a lingering flinty finish.

Waving Victor off, we wobbled our way from the area’s glossier streets to our hostel. We managed a few hours sleep before making our way to Queen Street Station and the next stage in our journey, the glorious three-hour train ride to Oban.

This route is exactly the kind of journey I imagine trains being invented for –breathtaking in its grandeur. As soon as we left the city behind, every window filled with mountain views, interspersed with lochs and the occasional ruined castle for good measure, running over with purples, rich browns, blues and greys till we could almost feel them seeping from us.

Just over two hours after leaving Glasgow, we arrived at Loch Awe – a place so aptly named it seemed absurd. At the end of a shred of land surrounded by slate-coloured water, Kilchurn Castle rises like a raku-fired sculpture of jagged yet perfectly placed points. Adding to the irreality of the setting, local folklore claims that a giant eel with 12 legs emerges from the water on chillier days, perhaps hoping to catch a glimpse of a train, surely a distant, faster-moving cousin.

At the end of the line we dragged our cases from the station to the Caledonian Hotel, just a few metres away, admiring the harbour as we went. The stately building has been standing here since the railway line reached Oban in 1882, and it’s easy to imagine Victorian women climbing its staircases, skirts whispering in the hallways. 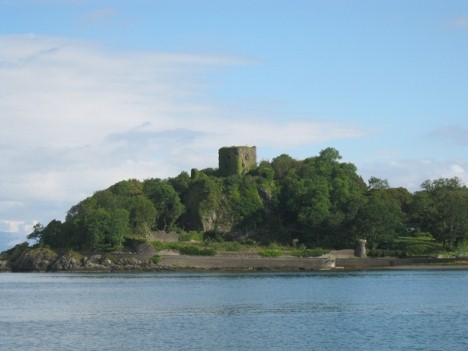 Turning right on exiting the hotel, we walked the waterfront promenade, pausing to climb the steps down to the pebble-strewn beach where sea glass shelters in soft-focus amongst china-blue fragments of mackerel shells. Along this stretch of the bay, countless hotels jostle for space amid the award-winning fish restaurants that give this town the accolade of being known as Scotland’s seafood capital. It’s all overlooked by the gaping eyes of Oban’s coliseum, McCaig’s Tower, and just as the folly disappears from view, you’ll spy another local landmark, the ivy-covered sugar cube that is all that remains of Dunollie Castle (pictured right).

Nearing the end of the stretch, we reached the thickly grassed gardens where the War Memorial stands, accompanied by piercing tributes to more recent tragedies. Like a religious icon to all this human disaster, the little Dunollie lighthouse gazes across the bay to Hutchenson's monument on the Isle of Kerrera. On the other side of the road to the lighthouse, you’ll see a great tooth of rock, known as the dog stone, or Clach-nan-con, where the giant Fingal is said to have tied up his immense dog Bran. A mysterious groove near the base is supposedly where the dog’s chain rubbed away the rock.

We gained better views of Dunollie Castle from the sea the next day, taking one of the much-promoted boat-rides to see the seals doze. Like angel-faced slugs, they lifted their heads as we neared, yawned and dipped back into sleep. 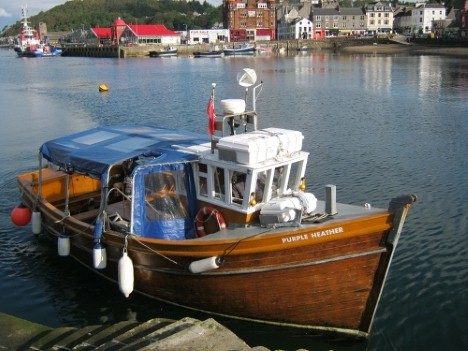 Our next sea voyage was on a far larger vessel as we took the Caledonian MacBrayne ferry from Oban to Craignure on Mull. We could see our hotel, the Crerar Isle of Mull Hotel & Spa, from the port, lying low against the greenery of the suddenly storm-lashed shore.

The following morning the storm had gained resolve, but we were equally determined, pulling on waterproofs and following the receptionist’s directions to Craignure bay, where seaweed slicked rocks gleamed in the rainfall.

Back at the spa we decided to embrace more of the local countryside with a session in the Rasul Mud Room, paying £20 each for the pleasure of slathering ourselves in moist grey mud. A slow-building heat sealed the mud onto our bodies and faces, gradually drawing out impurities as we giggled at the sight of one another looking like primeval creatures. Just as the heat was growing too intense to bear and we thought our hard mud shells might crack, two showerheads erupted and doused us clean.

Feeling cleansed and purified, we were unfazed to learn that the bus to Fionnphort (pronounced like pinafore, with an ‘f’ instead of a ‘p’), where the ferry departs to Iona, might not be running, and headed down to the bus-stop in the hope the receptionist might be wrong. With only a handful of buses scheduled each day, we were relieved to see the bus standing waiting, and boarded despite the driver’s warning that it was the ferry that might, in actuality, not be running.

Despite our blithe optimism it felt like a huge achievement to finally make it to the island.

After a vast cooked breakfast at Torrasa Guest House, that kept us going for much of the day, we strolled to the abbey and arrived just in time for a small tour, inclusive with the £5.50 entry price. Our guide pointed out intriguing details such as an eerie face sculpted midway up one of the arches leading to the nave. Adjacent to this, the cloisters provide an eye-spy of curious carvings, including the serene face that appears on many postcards and provides a contract to the creepy countenance on the nave’s archway. 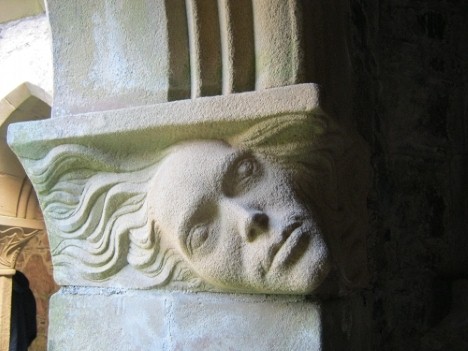 The carved face in the Abbey (photo: Judy Darley)

In the afternoon we set off across the island to see the other side, following a path that soon melted away into rust-coloured peat bogs. Sheltered by curious rocky hillocks like barrows, I felt like we’d reached the heart of the isle, beyond sight of any living thing other than the crotchety sheep who baa-d at us constantly, warning us off their land.

It may seem impossible to get lost on such a small area of land, but we achieved it, and to my mind it was the perfect thing to do in such a mystical place – for a short while the only things in my head were the mounds that surrounded us, the sheep and the sky.

The next morning we rose early to catch the 9am voyage back to Mull, then the bus across the island to catch the larger ferry to Oban, and from there the train to Glasgow.

The sun was already promising a beautiful day, the Sound a sparkling antithesis of the seething sea we’d crossed just a day and a half before. As we glanced back to bid the sacred isle farewell a faint rainbow became visible in the sky above the abbey.

My friend and I beamed at each other – things couldn’t get better than this, surely.

Moments later I noticed a group of fellow passengers cooing excitedly, and followed their pointing hands to see a smooth grey fin break the surface, then another. Twelve or more dolphins danced around the boat, rising, disappearing then reappearing endlessly throughout the too-brief journey back to Fionnphort.

That’s the thing with Iona – it will surpass your expectations in the most unexpected ways.

Getting there:
easyJet flies to Glasgow from Bristol, Jersey and all London airports

So much of Scotland is about rugged hillsides and stormy seas that it can be easy to forget how indulgent a visit to the country can be.

Remote island hopping holidays will be big in 2013, especially in Mozambique’s up and coming Indian Ocean wilderness.

Broad Bay House on the remote Isle of Lewis in Scotland is an idyllic spot for some rest and relaxation before spring leaps upon you.

Whether you’re seeking an escape on the water or off it, Brescia’s lakes entice you to slow down and enjoy life, as Judy Darley discovers.

Where to go for the best Tuscan cuisine

Argyll, the Isles, Loch Lomond and the Trossachs castle holidays

What to see and do in cultural Cairns

Hire a car for holidays in Milan