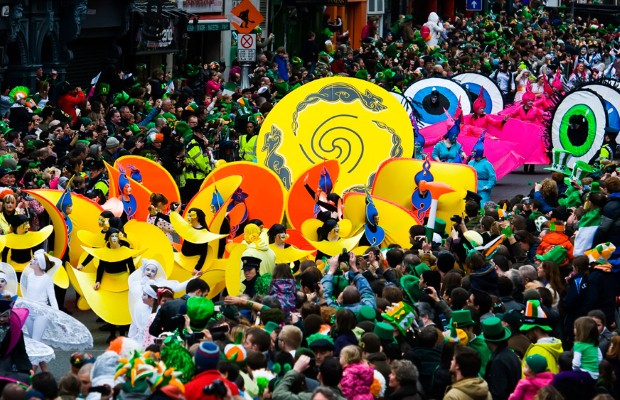 The craic will find you in Dublin
You can't beat Dublin, as the very best place to celebrate St Patrick's Day. The city gets into full swing for its annual St Patrick's Festival, which runs from March 16th-19th and showcases Ireland and Dublin to the world through film, music, comedy, spectacle and family events.

World-famous for its culture and craic as well as its abundance of lively pubs, this is Ireland's biggest annual event, attracting some 1.5 million people and culminating in the three-hour festival parade on the final day.

Most of the events are free, and there's something to suit most tastes and ages, so it's the perfect event for a good value group trip. Join in the family treasure hunt, and keep an eye out for art installations in unexpected locations around the city! 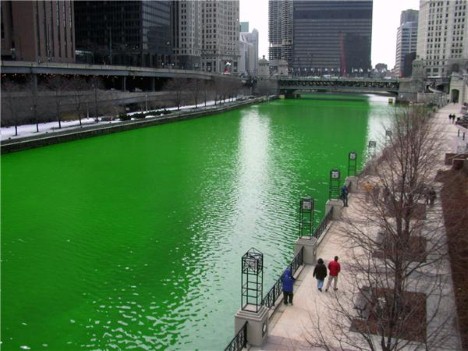 On the other hand, Boston claims to have held the first official American St Patrick's Day celebrations in 1737 and Massachusetts calls itself the nation's most Irish state. You can expect a big party with music and laughter all over Boston and across the state there will be hundreds of concerts and dances, theatre and literary events, culinary feasts and and genealogy lectures from Boston to Holyoke and from the North Shore to Cape Cod.

On the March 17th the city of Chicago will be colouring its river bright Irish green with non-toxic dye to celebrate the famous St Patrick´s Day Parade on the same date (pictured left). The parade is the Saturday before the actual calendar date of Saint Patrick's Day to allow families to participate in the festivities. The best viewpoints for the parade are from the East side of the bridge at Columbus Drive or upper and lower Wacker Drive between Columbus and Lake Shore Drive

Savannah, Georgia, has been celebrating St Patrick's Day since 1813. It is home to the second largest St Patrick's parade in the US, drawing party people from around the world with numerous Irish themed events arranged throughout the day.

St Patrick's Day in Europe
Festa Irlandese in the Italian city of Florence is ten days of celebrations around St Patrick's Day. Thousands of people come to see live performances of celtic music and dance in this celebration of all things Irish. And to sample what is admittedly an Italian interpretation of Irish food and drink, including plenty of stout.

In Germany the only place to be on St Patrick's Day is Munich. The large Irish community established the first parade in 1995 with the help of Spike Milligan and the German-Irish Society of Bavaria. It's an exciting open air party that tries to bring a bit of the Irish way of life to Munich with live music, food and of course drink.

St Patrick's Day in the Caribbean?
Did you know the Caribbean island of Montserrat is the only country besides Ireland to celebrate St Patrick's Day as a national holiday? In fact, a whole week of events takes place on the island to mark the occasion from March 13th to 20th.

The island's Irish Heritage dates back to the 17th century and Irish connections are still evident today from the moment visitors arrive on the island and receive their shamrock passport stamp.

Events taking place during the week will include the annual St Patrick's dinner at the Montserrat Cultural Centre, a Freedom Run to commemorate an eighteenth century slave uprising, an island pub crawl starting at Garry Moore's Wide Awake Bar and a Heritage Day and feast in Festival Village with local food, music, dances, games and the heritage day Jamboree.

The London Eye, Burj Al Arab in Dubai, Table Mountain in South Africa and the Empire State Building are just some of the iconic buildings and attractions around the world which will ‘go green’ this year for St Patrick’s Day.

St Patrick's Day: Where to celebrate around the world

Want to paint the town green this St Patrick's Day? The festival of Ireland's most famous saint is celebrated around the world on March 17th – even in the Caribbean!

Top 5 Halloween fun around the world

No one does Halloween like the Americans and so it's no surprise that the five boroughs of New York City are preparing for a scare with great anticipation as October 31st draws near.