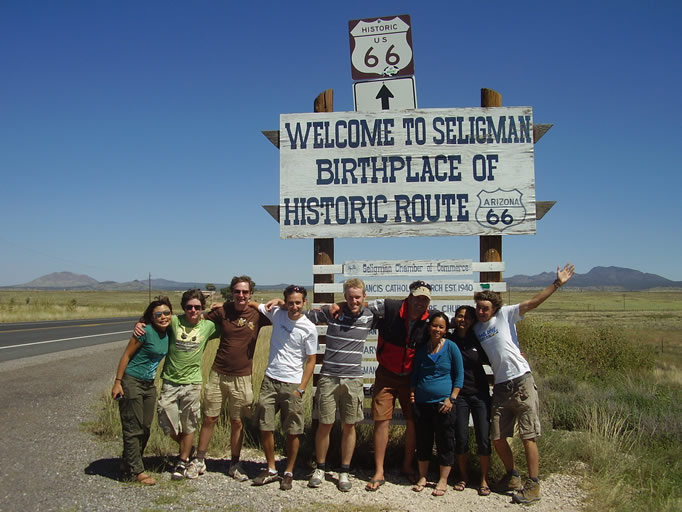 There have been books written about them, films based on them and lots of stories told of them, but now is your chance to see for yourself what American road holidays are all about.

Coast to coast is often portrayed as the dream journey many would like to take and – at a distance of just over 2,900 miles – the route between New York on the east and San Francisco on the west is one that is sure to create many tales.

TrekAmerica offers a special American Road Trip between these two destinations, which takes in some of most famous sights – and a selection of the craziest – as you travel on USA trips.

In between the two major coastal cities, the journey includes 18 other stop-off points such as the gushing waterfalls of Niagara, the famous music region of Tennessee and the spectacular scenery of the Grand Canyon and Monument Valley.

From New York to Memphis

Before you leave New York you should be sure to take in all the sights of the famous city. There are the obvious highlights such as the Statue of Liberty, Time Square, Central Park and the Empire State Building, which make perfect settings for photographs, as well as a wide array of museums – catering for art, history and science lovers and a whole lot more.

From the Big Apple, the tour moves on to Finger Lakes and Niagara, where you will be met by awe-inspiring natural wonders. If the chance arises, you may want to test the Finger Lakes' wine regions – but you will have to remember not to drink too much as you will have a long journey ahead of you! Niagara Falls is world-renowned as a place of beauty. If you get the opportunity, you should see it at night-time because it can look even more dramatic than it does in the day.

Cleveland, Ohio is the home to the Rock 'n' Roll Hall of Fame and this part of the adventure holiday marks the start of a trip down musical memory lane. Louisville, Nashville and Memphis are all famous for their musical output so heading through these parts of the US will give you a chance to follow in the footsteps of a number of luminaries such as Elvis Presley, who lived in the latter in his famous Graceland mansion.

Nashville has a strong country music history and various stars of the genre such as Johnny Cash have helped contribute to its fame by performing in the city in years gone by.

From Hot Springs to Mesa Verde

Once you have finished relaxing in the mountainous surroundings of Hot Springs, the next stage of your journey takes in Oklahoma – famous for giving its name to the hit stage musical by composer Richard Rodgers and librettist Oscar Hammerstein.

Your road trip with TrekAmerica then takes in Amarillo, Roswell, Santa Fe and Durango, before reaching Mesa Verde. This truly is middle America and you will get to see some places that are far off the beaten track, which is sure to appeal to adventure holidays enthusiasts.

Roswell, New Mexico is the home of a UFO Museum and is also the place where it is alleged the remains of alien debris and an object from outer space were found back in 1947. The locals have many stories to tell which will just add to the mystery and adventure of this part of the tour.

From Monument Valley to San Francisco

As you reach the final part of your incredible travel trip across America, there are still plenty of points of interest still to take in. Be sure to investigate the vast sandstone buttes and jagged rocks of Monument Valley.

There are also the spectacular national park areas of the Grand Canyon and Yosemite to explore – two of the most popular places in the US among tourists – as well the electrifying city of Las Vegas and the Nevada-California border region that is Lake Tahoe.

By the time you have got this far on your USA road trip, you will have experienced the diverse terrain, unique mixture of characters and exciting cities that the country is famous for – but you will still need to save yourself for something just as special. San Francisco: the hilly city: home to the iconic trams, the architectural masterpiece that is the Golden Gate Bridge, a bustling, mixed-culture town centre and the final stop on the whirlwind tour from coast to coast.

The trip of a lifetime

Choosing TrekAmerica to make your way across the USA will mean you get to experience a Niagara Falls Maid of the Mist cruise and admission to the aforementioned Rock n' Roll Hall of Fame, Roswell UFO Museum and National Parks all as part of a package deal.

Mixing these fantastic activities with a selection of your own is sure to equate to the road trip of a lifetime.

Make your holiday your own with a rented villa

Take in the sights of the USA with American road trip

Travel deal: Cottage in Cornwall during the Jubilee | Travelbite