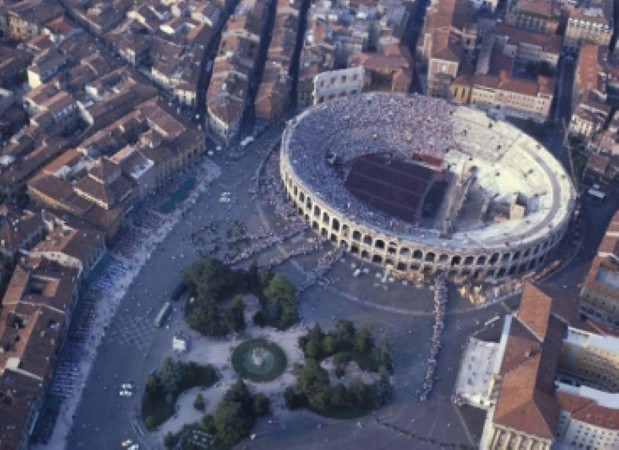 Verona Arena is a magnificent sight

There are many fascinating places to visit for school trips to Italy, including the city of Verona. It is a perfect destination for an excursion during tours to Venice or Lake Garda, thanks to its combination of cultural and historic landmarks.

Like many places in Italy it has a selection of Roman ruins to see, together with some fine medieval architecture. What sets the city apart from many others in the country is its association with one of the greatest works of English literature.

Verona was the setting for one of William Shakespeare's most-famous plays and you can still see some of the buildings said to feature in it. Thousands of people travel to the city every year to see Juliet's House – also known as the Capulet House – and stare up at the balcony. You can take a tour of the property, which is furnished in an authentic 14th century style.

You can also visit Romeo's House in the centre of Verona, although the interior is not open to the public. One further Shakespeare-related site is what is reputed to be Juliet's tomb, which is in the crypt at the monastery of San Francesco al Corso.

No study tour to Italy would be complete without a visit to a Roman site and few of them are more spectacular than Verona Arena. This first century amphitheatre was originally a venue where crowds of up to 30,000 gathered to watch gladiators fight to the death.

It is remarkably well preserved and a tour of it will allow your students to use their imaginations and picture what went on there during Roman times. It is now used for concerts and operas, which would make for an interesting experience for those studying music and drama.

This beautiful church was built in the tenth century to honour Saint Zeto, the patron saint of Verona, and extended over the next 400 years. It is a superb example of Romanesque architecture, complete with an imposing facade and a famous rose window known as the Wheel of Fortune.

Verona has a collection of fascinating exhibitions and galleries to visit, including the Castelvecchio Museum. It has one of the best collections of Medieval and Romanesque sculpture in the world, along with displays of weapons and Veronese paintings. The most memorable piece is the Sarcophagus of St Sergius and Bacchus, which depicts two archers shooting an eagle.

A guide to summer events in Lyme Regis