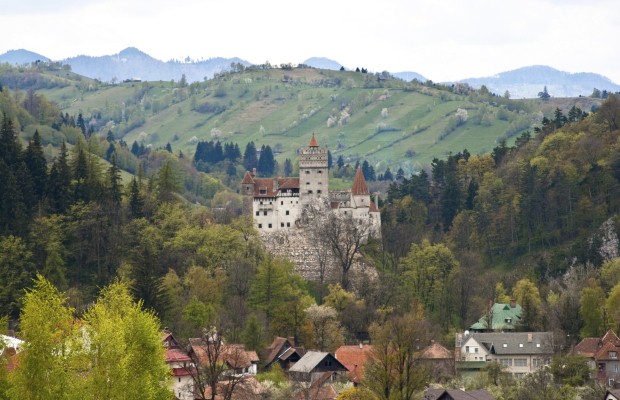 It is mid-winter and both Bucharest and Romania are blanketed in snow. The mercury hovers below zero and the windows of the Ca Bere beer house glow up ahead through the dusk as we pick our way along the snowy street.

This trip was a last minute affair, organised to satisfy a long-held ambition to see Bran Castle, the setting for Bram Stoker's 1897 gothic novel Dracula. I booked it using Expedia's new TripAssist app and soon found myself at the comfortable boutique Hotel Moxa in Bucharest.

Next day we headed into the Carpathian Mountains that embrace Transylvannia in a gentle curve. The hillsides are covered in snow-frosted trees and also the second largest population of brown bears in Europe, as well as wolves, deer, and wild pigs and black goats.

Then Bran Castle itself, rising in its highly strategic position between two thickly wooded hills and overlooking the Transylvania – Wallachia border. For many hundreds of years this was an important revenue gathering point and a series of battles were fought to control the border.

Of course Bram Stoker never actually visited Romania. A true fiction, Dracula was composed entirely sitting at a desk in the British Library in London. The inspiration for the name came from the family name of the descendants of Vlad II of Wallachia, who took the name "dracul" after being invested in the Order of the Dragon in 1431. The word dracul meaning either "dragon" or "devil".

Stoker may have chosen Bran castle by coincidence and upstairs you’ll find an information board drawing some completely spurious connections between the castle and Stoker’s novel. But the real history of the castle and the region are far more interesting.

When the borders changed in the 19th century the castle lost its importance and it was used for a time as a royal summer residence but for the most part it still looks very medieval, all narrow stairways, thick doors and archer's windows. There's even a secret passage for escape in case of attack.

In today's winter temperatures it is sobering to think of the harshness of medieval life. I can imagine knights striding about in their long chainmail shirts and black cloaks. Stoker's vampire count was based on Vlad III, who wore an Ottoman fashion turban and curved sword adopted during a time of imprisonment in his youth.

Vlad III's famous moniker was 'The Impaler' and it is thought this was another connection to the vampire legend. In fact impaling was a common punishment at this time and Vlad was mainly famous for perfecting the cruel torture to keep victims alive as long as possible.

His life is a long history of war and betrayal. He was known more for being a great general who other European rulers regarded as an effective shield against the Ottomans and he was good to his people, improving the lives of peasants.

The market outside the castle gates is very popular and you can see evidence of the tourism market that has grown up around the Dracula connection in the bottles of 'vampire wine' on sale. But Transylvania is still a very traditional region, with many people living in ways that have not changed for centuries.

It may have been complete coincidence that led to Bram Stoker choosing this castle in isolated Romania for the setting of his novel but the real history and landscape are much more fascinating.

Sink your teeth into Romania

Sink your teeth into Romania

Visit Transylvania, the setting of vampire horror classic Dracula, and see the inspiration behind this timeless novel.

As cool as ice in Romania

New holidays to rural Romania for 2007

Romania is set to be a top emerging holiday destination this year with its new EU member status and the city of Sibiu being European Capital of Culture for 2007.