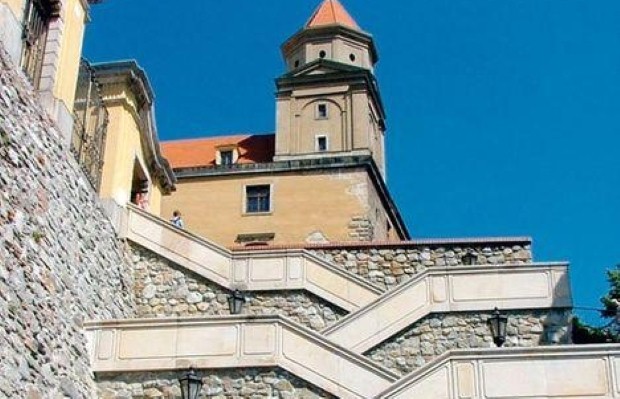 This year we’ll be following the odyssey of Peter and Christine Helliwell as they undertake an entirely self-funded bike ride from London to Sydney to raise money for charities Medicins Sans Frontiers and Mary’s Meals. The intrepid couple will be sharing their experiences in a blog for Travelbite.co.uk and here is their fourth blog entry:

Having said goodbye to Christine’s parents in Vienna, we pedalled on to Bratislava in Slovakia. The distance is only about 40 miles or so, so only took us half a day, but what a difference.

Whereas Vienna is full of amazing buildings that are very well preserved, as well as generally being immaculate with good quality public facilities, Bratislava is rather grey and run-down with a very Soviet-style era feel to it. The roads are mostly in a terrible condition, and it turns out that a couple of days earlier Dean, who we first met in the UK and who is doing a similar trip to us (but was a couple of days ahead of us at this point) got his front wheel caught in a tram line, fell off and broke his arm. Not good at all.

Our sympathy is slightly limited though by the news that he has headed off to India to enjoy some beaches and cheap beer while his arm recovers, before returning to Bratislava to continue the trip. We hope he is having a good time and that the recovery goes ok. Needless to say we were very careful cycling around the centre of town.

I don’t wish to sound all negative about Bratislava though, it does have a very charming old quarter with lots of nice bars and restaurants, and a well-preserved castle which provides a great view over the city. It also has a lively nightlife and very cheap beer, with the consequence that hordes of stag do descend at the weekends, mostly from the UK it seems.

We experienced this first hand as we were there on a Friday night – doesn’t make you proud to be British. All in all certainly an interesting city to visit, but perhaps not at the weekend if possible.

The following day we cycled out of Bratislava with Matt, a fellow cyclist currently on a similar itinerary to us, and with his Slovakian host (via couchsurfer), who kindly cycled with us for the first 30km or so – very useful as otherwise we might have got lost!

It took us two days to get to Budapest, firstly along the river and some countryside on the Slovakian side, then through Hungarian countryside and some more riverside. We spent the night at a town called Komarom, which was great because it has thermal spring baths, with several campsites nearby.

It was certainly nice to spend some time soaking in thermal waters after a long day’s cycling. The following day into Budapest included the pleasant town of Estzertom, known for its architecture as the Rome of Hungaria, as well as the ‘Scenic Knee’ of the Danube, basically a big bend in the river north of Budapest which is particularly picturesque. The weather was great – summer has officially arrived – so it was a very pleasant couple of days.

Arriving into Budapest was somewhat chaotic because it was a Sunday, the weather was great, and there had been a huge cycling event in Budapest the day before. Consequently the bike path north of Budapest, as far as the pretty little town of Szentendre, was absolutely mobbed by people getting out of the city, mostly on their bicycles. All very nice but a little hard work when you actually want to get somewhere!

Rather than get stressed we decided to do as the locals were doing and stop for a cold beer to avoid the worst of the rush. Once installed at a hostel in Budapest we met up with Ollie and Tom, who we mentioned in previous blogs – it was good to catch up and hear about their experiences. We then had two days off the bikes, during which time we explored the city and generally relaxed – most welcome!

Budapest is a lovely city with lots of impressive architecture and a pleasant chilled-out feel to it. One of the highlights for us was visiting one of the many thermal spas in the city – we went to the ones in the main park, and were very impressed.

The complex is housed in an old but well-preserved ornate building, and includes around 20 pools of varying temperatures both inside and outside, as well as saunas and steam rooms etc. And all for around Â£10 each for the day! We took something to read and just relaxed. So much so that at one point we both dozed off in one of the warm pools!

After Budapest we headed south, with the intention of reaching Serbia via Kecskemet and Szeged, but this was not to be – turns out the road we wanted to cycle on is barred to cyclists (not sure why, it is not that busy).

In total we spent three or so days in Kuala Lumpur, and somewhat to our surprise we quite enjoyed it.

Travel blog: Made it to Istanbul!

After Sozopol we cycled down the coast and then over the hills to Malko Tarnovo, where we wild camped before crossing the border into Turkey the next morning.

Travel deal on a Luxury getaway in Oman | Travelbite.co.uk

Why the 'Somerset Riviera' is perfect for a family holiday

Escape the crowds in cottages on the Moors

Top things to look for in your holiday accommodation