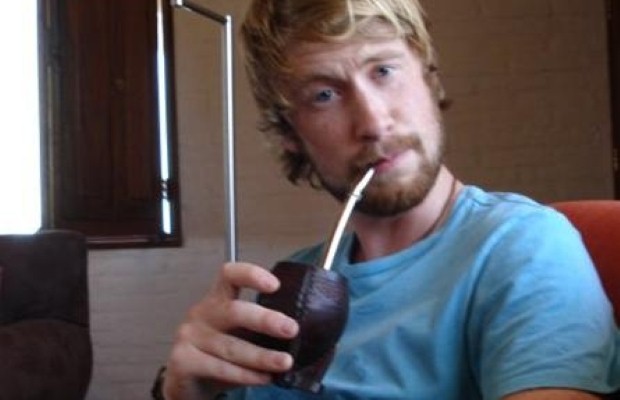 Along the way, he describes the strange sights, wonderful peoples and the inevitable sunburns of an pale Brit passing himself off as a beach boy. This is his ninth blog:

When Bruce Parry, presenter of BBC’s Tribe, hangs out with an indigenous group, he really immerses himself in their ways. If that involves drinking blood or inverting his genitalia then Parry is not one to shy away.

When I travel, I do so in a similar spirit, delving beneath the surface of a place to discover the true culture beneath. I’m talking about getting off the Gringo trail. I look back on my life travels and see a series of signposts pointing one way ‘Tourists-Speed limit 30mph’ and those pointing the other ‘Greg Ash- No speed limit applies’.

In Thailand I avoided the seedy ping pong shows, and instead opted to play the national sport of Table Tennis myself. In the USA I wasn’t afraid to say No to KFC and Yes to Popeye’s Chicken. And in Russia I sat with hundreds of Moscovites and watched a confused bear ride a motorcycle around a circus ring.

The latest signpost has brought me to Uruguay, where I am attempting to engage in a wholly new cultural phenomenon. That is, the habit of drinking Mate (pronounced ma-tay).

I actually first noticed this strange custom in Buenos Aires. Walking the streets I would occasionally spot locals holding an ornate coloured cup, sucking something up from protruding silver pipes. My first thought was ‘crack’, but after a bit of investigation I found that these locals were actually drinking a tea infusion called ‘Mate’.

In Buenos Aires this habit seemed a little quirky. But, here, in Montevideo, Uruguay, those not sucking on a silver pipe are in the minority.

Walk through the city in the morning, as people are setting out to work, and around 80 per cent of people are clutching mate paraphernalia. And it’s not just the cup and straw. The necessity of constantly topping up with warm water means most drinkers carry a thermos under one arm. These aren’t the portable thermos that dad might take with his lunch in the 80s. These are big boys. Feeling a little inadequate, I decide its time to take the plunge.

Luckily, I am studying Spanish this week at one of the city’s schools, and my teachers are more than willing to pass on their Mate knowledge. They are a friendly bunch and the next morning I proudly display my starter set I found in Montevideo’s old town. It includes a straw, called a bombilla, the cup, which is actually the Mate, and yerba (herb). All this for the reasonable sum of Â£2. Bargain. I am sure they will be impressed with my efforts.

Instead, as I display the set, I am met with ridicule. My teacher, a usually reserved 60-year-old, guffaws at the sight of it. Other teachers come into the kitchen to see what the noise is about, and, seeing my pack, join in the laughter. Suddenly I am in the middle of a Freudian nightmare as a crowd of older women cackle, point, and wave my flimsy metal straw in the air.

Even the other students are laughing and they don’t even know why. It is then that I learn an important fact about Mate. It is more than just a drink. In Uruguay Mate is a symbol of national identity. And apparently a Â£2 starter set does not quite cut it. It is like bringing a Dairy Lee triangle to a cheese tasting evening.

As the laughter subsides, my teacher reaches into her specially designed satchel, pulls out her Mate and plonks it on the table. She doesn’t need to say anything. We’ve all seen Crocodile Dundee, and her face says it all, ‘That’s not a Mate, THIS is a Mate’. She then meticulously begins to prepare the drink.

The students and other teachers look on in awed silence.

In Uruguay, drinkers take pride in their preparation methods, and everyone has their own style. But the basic technique is as follows. The herb is pureed into the Mate, so it lies about an inch from the top. It is then titled so the herb lies at an angle. The bombilla is then shoved firmly down and into the lower side. Water is boiled, and then allowed to cool slightly so as not to damage the herb, before being poured into the mate in stages.

After a couple of minutes it is ready. We all wait expectantly as the teacher slowly raises it to her mouth. She sucks in, making a ridiculous slurping sound. I stifle a laugh, and await my first taste. Mate is a social drink and users often share it among three or four others. I watch the teacher drink, and await my turn like a college fresher awaiting his first ever drag on a joint. But I am left disappointed. She smiles, and stands up, clutching her Mate to her chest.

The lesson is over, and my mouth is still dry.

The next day I return to class with a new Mate and a bombilla. This little pair has set me back a good Â£15 so I’m confident in their quality. The teachers look impressed. Apparently my brand of bombilla, Alpaca, is one of the best. I nod, as if I knew this all along, and begin to prepare my first drink. ‘No’ one of the teachers shouts. Although my Spanish is shabby, I understand her and stop what I’m doing. Before I can use my Mate cup, she tells me, I first need to let the herb infuse in it for three days.

Snobby, time consuming, I begin to realise why this ridiculous pastime hasn’t spread over the Atlantic. But, obediently I do as she says.

Finally, three days on, I am about to taste Mate. I raise the straw to my lips and slurp noisily. Predictably it tastes horrible. Bitter, and with a nasty aftertaste, it is like really stewed tea. I joke that “nothing pleasurable is ever good at first… like sex” and instantly regret it, given my company of older female teachers. I persist and fill up the mate again with some more warm water.

The taste isn’t actually that bad after a while. I am drinking Canarias, which apparently is the strong stuff, ‘the good shit’. Ten minutes later I am buzzing. The feeling is different to the effects of caffeine, less edgy and more alert. Some say its effects are similar to mild cocaine. I spend the next ten minutes standing stationary in the kitchen, blinking and feeling a little uncomfortable. Trying Mate has not been the most enjoyable sensation, and I resolve that once is probably enough for me.

One week later I sit in a hostel kitchen. Carefully I pour the hot water into the yerba, as a few gringos look on, expectantly. The pupil, it seems, has become the master.

Queuing to cross the border from Bolivia into Argentina is a mammoth test of endurance, patience and humour.

Travel blog: Local cuisine with the tribes of South Africa

As bowls of corn pap and cabbage were handed round, it was as if I was caught in the scene of the latest television documentary on Africa. 'Mama Joseph', the mother of our guide, watched with eager anticipation to see the reaction on the faces of her latest guests.

The hippie movement was started in the 1960s with communities all over the world aspiring to the ideals of peace and love.

The best of Travelbite in 2013: Our pick of features | Travelbite