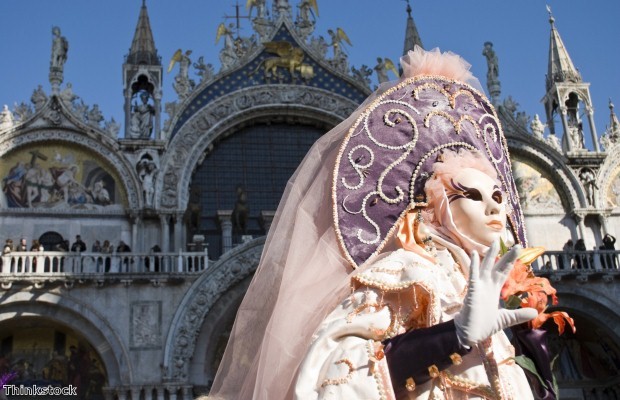 The Venice Carnival is one of the most famous in Europe

Want to party the night away at the famous Rio Carnival but not sure you can take that much time off? The South American carnivals may be the most famous, but there are a host of colourful carnivals closer to home, from Venice’s iconic carnevale to the Bollywood-themed Tenerife Carnival.

Here’s our pick of the best:

Tenerife Carnival: February 6th-17th
Tenerife Carnival, the world’s second largest festival of its kind after Rio de Janeiro, focuses each year on a different theme. This year’s event will pay tribute to all things ‘Bollywood’ following popular demand. The ‘official carnival’, with its murgas (comic groups who sing satirical and ironic songs) and comparsas (dance groups), will be taking place alongside the ‘street carnival’ where drums, trumpets and electronic music will add to the excitement of the most ‘Brazilian’ of all the Spanish carnivals. Other highlights of the Santa Cruz Carnival, which was declared a Tourist Festival of International Interest in 1980, include the opening street parade (February 8th) and the ‘Burial of the Sardine’ (February 13th), when the carnival comes to a symbolic end in a blaze of glory, although the partying carries on for a while afterwards. What’s more, visitors can enjoy Tenerife’s pleasant warm climate, with average temperatures of 18°c in February!

Las Fallas Festival, Valencia: March 15th-19th
Spain knows how to throw a party and none is more colourful and spectacular than Valencia’s Las Fallas in March, one of Europe’s largest street parties. Attracting over three million visitors a year, Las Fallas festival features extravagant firework displays, round-the-clock festivities, ear-splitting firecrackers and open-air music concerts. The stars of this extraordinary five-day festival are some 700 small and large scale fallas (papier-mâché effigies) displayed on more than 400 streets around the city, , some up to 30 metres high, showing satiric or humorous caricatures of celebrities, politicians or the hottest issues of the year. In the exciting finale of the festival on March 19th all of the fallas are burnt, save the best one, which goes on display in the Fallero Museum,

Venice Carnevale: January 26th-February 12th
Dating back to the 13th century, the 'carnevale' is Venice’s most popular events. The annual festival – which is held over the ten days before Shrove Tuesday – is believed to have begun in medieval times, when Venice celebrated a victory against the ancient Roman city of Aquileia. These days however, it’s all about celebrating Venice’s rich cultural heritage. Every year the Piazza San Marco explodes with colour and activity, when millions of revellers dressed in all their finery take to the square to celebrate in style. What makes it particularly unique is its use of masks, which have long since allowed revellers to conceal their social position and rid themselves of inhibitions.

Lucerne Carnival: February 7th-12th
From February 7th to 13th, strange characters in weird and wonderful masks parade through the streets of Lucerne with great pomp and pageantry. The Fritschi parade – which takes place on Dirty Thursday, one week before Ash Wednesday – dates back to the 15th century and centres around the figure of Fritschi (origin unknown), an elderly man with his wife known as the Fritschene, and the Fritschikind, or Fritschi's child. Historically the parade included merry troop of soldiers who carried their weapons to commemorate their victory at Ragaz in 1446, , however in 1713 the City Council and representatives voted to end the military display of armour and establish the Fritschi parade as a happy celebration of Lucerne culture.

Viareggio Carnival, Tuscany: January 27th; February 3rd, 10th, 12th, 17th, 24th
The Viareggio Carnival was founded in 1873 and has since become one of the grandest in the world. The main attraction is the spectacular parade featuring giant colourful statues of politicians, sportsmen and women and celebrities, made from papier mâché and festooned with decorative lights. The figures can take up to a whole year to create and even have moving arms and rolling eyes! In 2013, the carnival masked parades will take place on  February 3rd , 10th , 12th , 17th  and 24th, along the extraordinary Liberty seaside boulevards. Every evening, there are carnival celebrations in all of the city’s different quarters to enjoy.

Gallery: Mardis Gras around the world in pictures

From the vibrant samba parades in Rio de Janeiro to masquerade balls in Venice, mardi Gras (Fat Tuesday in French) is celebrated in very different ways across the world.

Tenerife Carnival to be Bollywood themed in 2013

Tenerife Carnival, the world’s second largest festival of its kind after the famous Rio Carnival in Brazil, is set to return to the island from February 6th to 17th 2013.

The affordable airline easyJet has added five routes to its winter flight schedule, making 190,000 more seats available for its passengers.

Beyond Rio de Janeiro, there are plenty more ways to enjoy the Carnival around Brazil from February 17th– 21st 2012.

Book activity holidays in the Eastern Med with Headwater – travelbite.co.uk

Choose Wyoming for a USA holiday with a difference